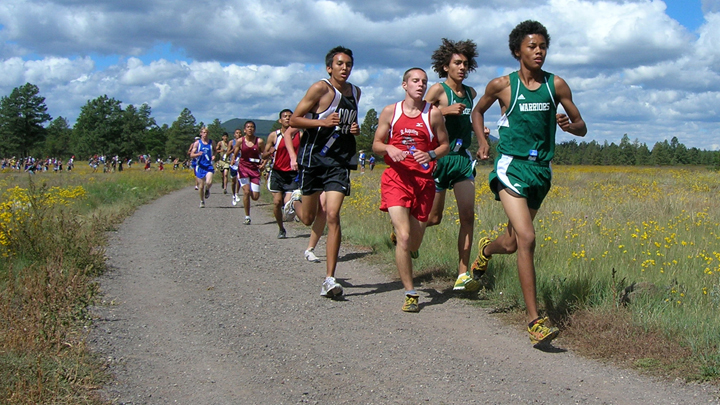 Many of this month’s programs focus directly on various Native peoples living in New Mexico or the American Southwest. For ease in highlighting, the various shows are profiled below in chronological order.

For the Navajo and Hopi, running is much more than a sport, it is woven into the cultural fabric of their lives. Encouraged by their elders, many Navajos and Hopis begin running at an early age – to greet the morning sun, to prepare for a ceremony or simply to challenge themselves in the vast, southwestern landscape. In the rugged canyon lands of Northern Arizona, Navajo and Hopi cross-country runners from two rival high schools vie for the state championship while striving to find their place among their native people and the larger American culture. Win or lose, what they learn over the course of two racing seasons has a dramatic effect on the rest of their lives.

Combining interviews with verite-style shooting, this program offers a rare view into the surprising complexity and diversity of contemporary reservation life, from the point of view of five teenage boys on the cusp of adulthood. The documentary follows Ryan, Dennis, Billy, Johnny and Joyai from the classrooms to their remote, un-electrified homes, from grueling runs across canyons and mesas to their ultimate day of reckoning – the state meet – and beyond.

In 1864, President Abraham Lincoln recognized Pueblo independence by bestowing an ornamental, silver tipped cane to each Pueblo Nation. From more than 500 Indian nations in the United States, only New Mexico’s 19 Pueblos received these symbolic gifts of sovereign status. They are revered by Pueblo people as symbols of the promise of continued sovereignty. Why did this war-fatigued President, with a policy of brutal confinement or forced relocation of Indian tribes, choose these 19 Pueblo tribes to treat with respect and recognize as inherently sovereign nations? The story of Lincoln’s conflicting motives explores the connection between the 16th President of the United States and the 47th state, and the significance of the symbol of sovereignty for each of New Mexico’s 19 Pueblos.  This film is a glimpse into the connection between American history and the culture of the Pueblo Indians, and into the sustaining message of the authority of the Lincoln Canes. Actor Wes Studi narrates.

An official selection at the 2011 Sundance Film Festival, GRAB is an intimate portrait of the little-documented Grab Day in the villages of New Mexico’s Laguna Pueblo tribe. This community-wide prayer of abundance, thanks and renewal exists at the intersection of traditional native and contemporary Western cultures. Each year, Laguna Pueblo villagers honor Catholic saints and family members by showering food and gifts from the rooftops of their homes upon the community gathered below. GRAB explores the origins and evolution of this 300-year-old custom, from its introduction by Spanish settlers to its modern-day twists. The film, narrated by actress Parker Posey, follows three families as they prepare for the annual event, chronicling their lives for the year leading up to Grab Day.

Thomas and Tamara are track stars at their rural New Mexico high school. Like many teenagers, they are torn between the lure of brighter futures elsewhere and the ties that bind them to home. For these teens, however, home is an impoverished town on the Navajo reservation, and leaving means separating from family, tradition and the land that has been theirs for generations. Erica Scharf’s “Up Heartbreak Hill” is a look at a new generation of Americans struggling to be both Native and modern.

Cory Mann is a quirky Tlingit businessman hustling to make a dollar in Juneau, Alaska. He gets hungry for smoked salmon, nostalgic for his childhood, and decides to spend a summer smoking fish at his family’s traditional fish camp. The unusual story of his life and the untold history of his people interweave with the process of preparing the food as he struggles to pay his bills, keep the IRS off his back, and keep his business afloat. By turns tragic, bizarre, or just plain ridiculous, this program tells the story of one man’s attempts to navigate the messy collision between the modern world and an ancient culture.