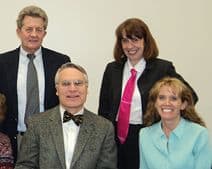 Board President Kevin Honnell and Secretary Melanie McKinley, seated, board member David Foster board member Judy Bjarke-McKinsey and board member Dawn Venhaus, not shown, unanamously approved a 3 percent pay hike for teachers and staff during Wednesday’s school board meeting. Courtesy/LAPS

The Board of Education unanimously approved a 3 percent pay increase totalling $850,000 during a Special Board Meeting Wednesday night.

Along with the pay increase, the school board agreed that 21 options should be included in the 2012-2013 budget incuding technology software, Common Core State Standards curriculum writing, professional development curriculum writing and training and facilities supplies.

The board approved utilizing up to $1 million in lease revenue, which is generated from renting school owned properties to Los Alamos National Laboratory, to fund these 21 expenditures.

The budget features an estimated $300,000 to $400,000 from cash carryover funds from the operational account.

School board member Melanie McKinley described the budget for next school year as the “best,” saying it was the first time they (current board) had gotten to add money is not the only item the LAPS to the budget, as the budgets for the past few years have seen less state funding because of the economic conditions in New Mexico.

A list of 33 expenditures were put before the board, they were ranked in order of importance, with the 3 percent raise being first, and Advancement Via Individual Determination (AVID) last.

Chief Financial Officer John Wolfe explained to the Los Alamos Daily Post that several meetings were held to develop the list with LAPS administrators and McKinley. The ranking, he said, was based on board and community input.

Even though the line was drawn at item 21-seasonal funds, the board discussed Budget Adjustment Requests (BAR), which Wolfe said could be reviewed later and possibly be covered by lease funds, for items ranked lower than item 21, if the board approved that action.

These items included summer school. McKinley wondered whether in the future, the district could discuss partnering with Los Alamos County to offer a summer education program that could be project-based.

As a former teacher, board member Judy Bjarke-McKenzie said she talked to parents who preferred to hire a private tutor during the summer months because the students would get one-on-one instruction. Plus, she said, teachers make more money tutoring.

He said summer school can make students feel like they are being punished whereas with project-based learning, they don’t want to stop.

“I’m a big fan of doing something different,” Washburn said.

Board President Kevin Honnell said summer school could be part of a strategic plan.

Although the school district was able to loosen its belt on its finances, McKinley encouraged the board and the administration to be cautious with using lease funds on re-occurring expenditures.

McKinley said that the district should spend money to make education great but also prepare for the future, adding that she did not want to hire staff using lease funds and then have to lay them off because the leases ended.

“I just want to use every dollar to its best use,” she said.