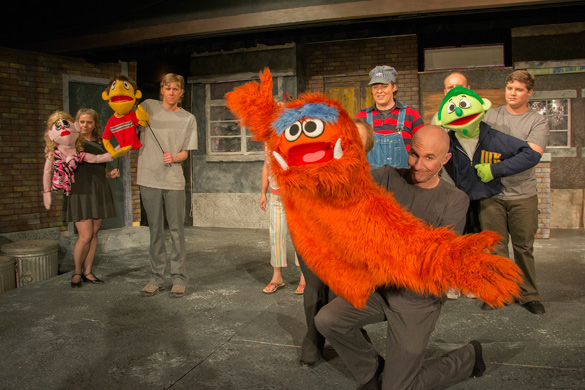 Trekkie Monster (Zack Baker) and some of the cast of Avenue Q. Photo by Larry Gibbons 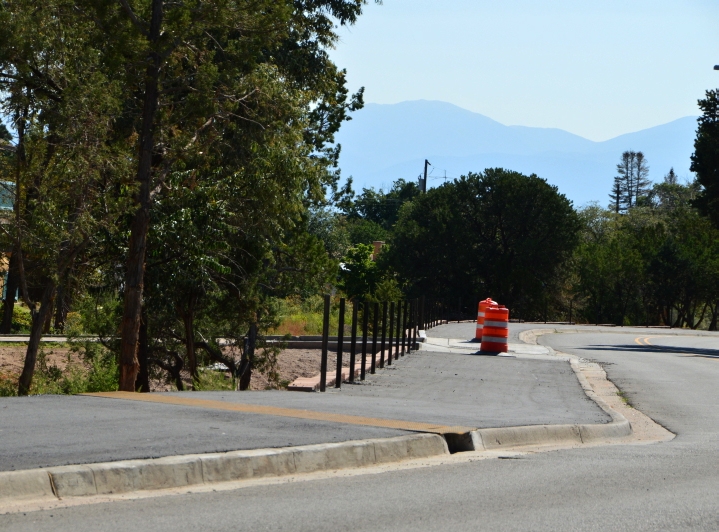 What to say about a raunchy, silly, sappy musical in which half the characters are puppets? I loved it. “Avenue Q” opened Friday at Los Alamos Little Theater to raucous laughter and hoots of delight.

The production is a collaboration between LALT and the Dixon Community Players and many of the fine cast will be new to the Los Alamos audience.

The production was designed and directed by the amazing Holly Haas, artistic director of the DCP and northern New Mexico’s very own theater genius. Haas had a long career as a professional theater designer before coming to New Mexico to “retire.” She then proceeded to work at Los Alamos High School for five years while running a Dixon vacation rental.

Now she seems to be spending all or most of her time putting on amazing productions in Dixon. We’re very lucky to have her for an LALT show—trust me on this. Haas never misses an opportunity to take chances or be silly. I hope this is the first of many collaborations.

In addition to designing a clever, functional set that brings us right into the heart of a run-down city neighborhood, Haas has done a wonderful job directing a difficult production in which half of the actors must control and bring to life a large hand puppet while singing demanding numbers. The cast is large, but they never get in each other’s way and the action flows smoothly.

“Avenue Q” opened off-Broadway in 2003 and went on to win Tony awards for Best Musical, Best Score and Best Book. It finally closed on Broadway in 2009, but is now showing off-Broadway once more, as well as in venues all over the U.S. and has even succeeded in England, despite the thoroughly American content.

Here’s why. Written with love and homage to Sesame Street and The Muppets Show by Gen Xers Jeff Whitty (book) and Robert Lopez and Jeff Marx (music and lyrics), “Avenue Q” is an adult take on the musical fun and lovable characters from these shows, so dear to the hearts of their generation.

And I do mean “adult.” Onstage puppet sex, plenty of foul language, falling into bed on the first date, a one night stand, an anthem to porn—it’s all here. (If you’re easily offended, don’t show up.) Don’t bring kids. Teens will love the show but you might be somewhat embarrassed yourself in their company. 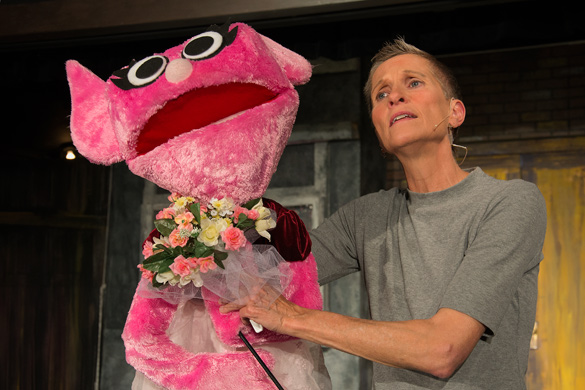 Kate Monster (Glenda Fletcher) deals with love’s disappointments. Photo by Larry Gibbons
The plot goes something like this. Newcomer and recent college grad Princeton (Connor Schulz) comes to the city with a shiny new BA in English to look for an apartment. He starts with Ave. A, but ends up on down-at-the-heels Avenue Q. He finds his place with a wild group of misfits, including child celebrity Gary Coleman from “Different Strokes!,” an ambiguously gay couple, a Japanese therapist with two master’s degrees and no clients, and a would-be comic among others.
Some of these characters are puppets (including Princeton himself) and two of them are monsters with fur and fangs.

Princeton forms an immediate connection with Kate Monster, but it proves a rocky road to romance as the couple and their neighbors tackle issues like unemployment, homelessness, racism, sexual politics and finding your “purpose in life.”

The cast in this show is in one word, spectacular. I almost couldn’t believe there were this many great singers in northern New Mexico who could wield big puppets and act while singing their hearts out. I especially loved the ensemble numbers where everyone comes together beautifully.

This couldn’t happen without the live five piece combo led by Brian Huysman and featuring Anne Huysman, Kip Bishofberger, Deniece Korzeka and Joyce Guzik. They are a real treat. Musical director Sheila Schiferel brought all of it together with panache.

The cast is so good I can barely do call-outs without writing a novel but I’ll try. First the puppet characters: Conner Schultz as the often clueless Princeton is charming, as is Glenda Fletcher as the sweet and wistful Kate Monster. They have a lot of singing to do and do it wonderfully. David Daniel is terrific as Republican neatnik Rod, secretly in love with his roommate, the equally terrific Stuart Rupprecht (Nicky).

Then there are my two personal favorite characters, the Bad Idea Bears, the play’s version of the devil on your shoulder, who are made endearing for all their wicked ways, by Gwen Lewis and Tyrrell Cummings. Cummings also plays Nicky’s left arm.

On the live actor side, Kile Uhlembrock and Kate Ramsey are great as the married couple Brian and Christmas Eve. Uhlembrock makes the laid-back Brian memorable. Ramsey makes feisty Christmas Eve lovable and believable though she’s exhibiting every Asian stereotype imaginable. Not bad for a white girl. Speaking of… David Daniel manages to pull off Black child comedy star Gary Coleman in spite of being white and 6’2”.

“Avenue Q” has a marshmallow heart and a happy ending in true Muppet tradition. It also raises touchy questions fearlessly, and coming from cuddly puppets, this works amazingly well.