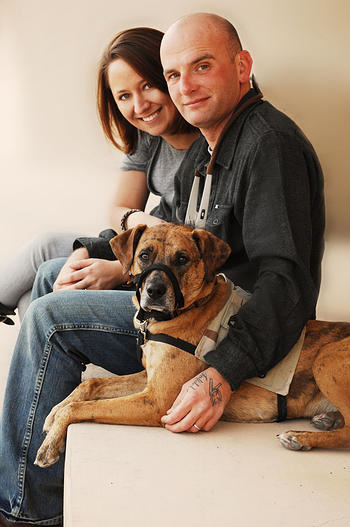 Stanek spoke to the Rotary Club of Los Alamos Tuesday, Feb. 18 at which he received a $250 donation for his program from the club.

He explained that he and his wife founded Paws and Stripes in 2010 because of his struggles with PTSD and TBI. Stanek’s career as a staff sergeant in the U.S. Army ended when he was sent home from his third tour in Iraq after being severely injured in combat. In addition to other injuries, he suffered from TBI and severe PSTD.

“One minute I was happy go-lucky and the next I was angry and ready to fight the world, Stanek said. “I was taking all kinds of medications to try and cope.”

When Lindsey saw how well her husband responded to a therapy dog during his treatment, the couple began investigating the possibility of getting a service dog for him or getting a trainer for their rescue dog, Sarge. They discovered that no organization existed to fill this need and moved to Rio Rancho to start Paws and Stripes.

With the advice of professionals, Stanek has trained Sarge as his own service dog. She now has 50-60 skills, Stanek said. Her skills range from letting Stanek know when someone is approaching him from behind, to getting help if he falls and assisting him with balance. She also helps him find his keys.

It took Sarge about six months to learn these skills, Stanek said.

“It typically takes a dog six months to a year,” he said. “She lets me know when I need to have some space. She is more attuned to my mood than I am.”

Sarge and Stanek are together 24 hours a day and he calls her his “battle buddy.”

“Sarge is someone I can talk to. She accepts me unconditionally. We have a very strong bond,” Stanek said.

After being matched with a dog, professional trainers help the veterans and their dogs learn the skills they will need, but each veteran trains his own dog, Stanek said.

“Our trainers are available 24/7 if there is a problem,” he said.

The dogs come from local animal shelters. Paws and Stripes screens the dogs to get a good match in terms of size and temperament. Then the veteran visits the shelter to meet some candidates.

Stanek feels strongly about using rescue dogs in the program.

“I rescued Sarge and she in turn saved me,” he said.

There have been some problems with businesses not allowing veterans to bring their service dogs on the premises.

“It may not be immediately obvious that the vet is disabled and people don’t understand that the dog is a service animal, not just a pet,” Stanek said. “I’ll go to the business and talk to the owner if there is a problem. People are starting to get it.”

Veterans must have been honorably discharged from the service and have a diagnosis of PTSD or Traumatic Brain Injury to be eligible for the program. They are screened to make sure they can take care of a dog and are a good fit for the program.

Currently there are 600 people on the waiting list, 200 in New Mexico alone, Stanek said.

To learn more about Paws and Stripes or make a donation, visit http://www.pawsandstripes.org/.