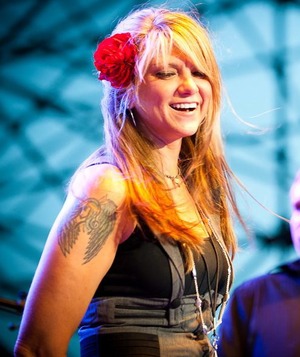 I hope you enjoy it, because it should be tremendously beneficial to the town. Let me say this again, shop locally. It’s so tremendously important to the County’s health! So friends, we’re celebrating with a concert by Paula Nelson.

I’m very excited about the Paula Nelson Band’s show on Friday. Paula sings country, rock, Americana, blues and jazz and even some classics. She’s a singer/songwriter, alto, soprano, twangy, sultry, sexy, sassy, sweet, blonde firecracker of an entertainer. Her influences are mostly her and her father’s best friends.

At her childhood family picnics and Christmas parties were guests like Kris Kristofferson and Rita Coolidge, Johnny and June Carter Cash, Waylon Jennings and Jesse Colter, Leon Russell, Ray Price, Doug Sahm and other very, very famous people. The barbeque cook was her dad, the legendary Willie Nelson. Paula started singing and playing piano at age seven. She has been a member of Willie’s band since birth.

Paula Nelson has a unique voice. Sometimes her phrasing is very similar to Willie’s but she’s not Willie.

“It used to hurt with the Willie Nelson’s daughter thing because people would ask her to sing Crazy and On the Road Again,” Nelson said. “Now I realize it’s a huge deal for folks to be that close to my dad, because he’s such a great guy. I think they come to the shows out of curiosity because of who my dad is. But, these days – I am quite sure, when they leave they remember me, too. They get a whole other experience unlike they thought they were going to get. That makes me proud.”

I’ve been listening to a lot of her music on http://www.paulanelsonband.com/ and on YouTube. I have loved and have been very proud of every concert that the Series has presented this year. I have no doubt that the Paula Nelson show is really gonna be something truly special. Her dad is invited but he’s playing in Cincinnati. As for Willie’s songs, I wish that every act would cover one of his hits especially Whiskey River.

“The chemistry between this band and I is magic both on the stage and off,” Nelson said. “I feel truly blessed to be in the company of these amazing musicians.”

Come by and catch the show and see what you think. We’re gonna be rocking, waltzing, two steppin’ and squeezin’ our dance partners.

Friday, July 26, we’ll be back at Ashley Pond with the incomparable Big Sandy & His Fly-Rite Boys. They’re returning for their 25th Anniversary Tour and this is going to another fabulous show. The band plays rockabilly, rock & roll, swing, country, R& B, soul, doo-wop and even some Jamaican rock-steady. You can read about and listen to them at http://www.bigsandy.net/ and on YouTube. Dancers, this is your show!!