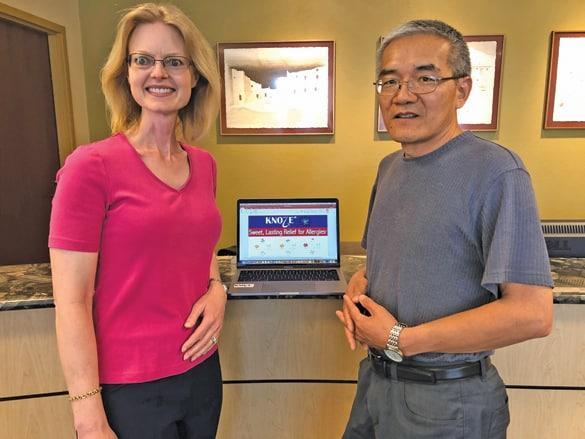 Cliff Han, the owner of Knoze Jr Corp, is practicing his messages to national markets and having a coaching session with Cindy Delgado from Dale Carnegie of New Mexico. Courtesy photo
BUSINESS News:
Three months after its initial launch in the Santa Fe area, allergy remedy start-up Knoze Jr. has received such positive feedback about its product, it’s going national.
To do that, Knoze Jr. founder and creator Cliff Han is shuttering his Santa Fe Place Mall storefront and refocusing his efforts on introducing physicians to the Knoze Jr. Prebiotic Lollipop, a patented, drug-free candy made with all food ingredients that actually helps reverse seasonal/perennial allergies by creating mouth conditions that are more hospitable to good bacteria–specifically, the little peacemaker responsible for calming down the immune system in the mouth and respiratory tract. Knoze Jr. will hit the road, stopping off in Atlanta for ASM Microbe, the American Society of Microbiology conference, June 7-11 and New York for New Product Event to pitch the media, June 19.
“In the first three months of business, it has become clear that the relatively few people I can reach one-on-one in my own store have been helped immensely by Knoze Jr. Prebiotic Lollipops,” Han said. “It is also clear that we need to get Knoze Jr. in front of physicians who want to offer their patients a highly effective, drug-free alternative to traditional allergy medications.”
Han’s own debilitating allergies started him on the path to creating Knoze Jr. Prebiotic Lollipops. A biologist who had spent two decades in Los Alamos National Laboratory and had been a physician in China, Han was perhaps the perfect candidate for a raging case of year-round allergies because he was actually in a position to do something about it. He conducted his initial research on himself, funding his own study until he was sure the Knoze Jr formula (a patented mix of sugars, amino acids and other nutrients that promotes the growth of beneficial bacteria in the mouth and throat) was effective. He then rolled it out to Amazon and his local storefront, where customer feedback bore up his findings.
Still, the start-up phase hasn’t been easy. In fact, the last three months have proven to be a steep learning curve for Han. Still, he created a patented allergy candy, overcame his own allergies and gained acceptance by a major scientific conference after being rejected by another one just a week prior.
“I’ll keep tapping on the doors until one opens,” Hans said. “The vast majority of customer feedback indicates Knoze Jr. Prebiotic Lollipops are highly effective at helping people find relief from allergies. I know how desperate you can feel before you get that relief, so I’ll continue to find ways to get this product into the hands of allergy sufferers.”
Along with ASM Microbe, next steps for Han and Knoze Jr. Prebiotic Lollipops include a testimonial video slated to be released next month, an increased online presence, and a national marketing campaign aimed at educating physicians. Learn more at http://knozejr.com.
Menu
LOS ALAMOS