Pastor Granillo: The Marriage of Jack and Jill 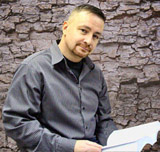 When Jill was first introduced to Jack, she knew something was missing in her life. Everything about him and everything that she had heard about him seemed to be exactly what she needed. Soon enough, she responded to his calls, and before she knew it, she had given herself in marriage to Jack. Jack adored Jill. He was willing and able to provide for, protect, and encourage her to become more than she had ever imagined possible. No one had ever loved her like Jack did. This was a marriage made in heaven.

Over the course of time, Jill felt as though her life had become complex. She had a career, a life, and she loved to unwind with her friends. It seemed like Jill was always on the go; and when she wasn’t, Jill was absolutely exhausted. Her relationship with Jack began to suffer, even if she didn’t realize it. She would try to visit with Jack for at least a few minutes every morning, or every evening, but often, life got in the way of that as well. Jack, desperately wanting to spend time with his bride, suggested that Jill set aside one hour a week for them to meet. This seemed fair to Jill. She even let her friends and her work know that she loved her husband and that this one hour a week was set aside for him alone.

Since she was always being rushed, Jill found that it was often difficult to make it to their dates on time. Eventually, showing up 10-15 minutes late for the dates became Jill’s norm. “Just order for me,” she told him. “That way I can eat as soon as I get there. You know I’m not comfortable with pre-meal small talk.” Jack was faithful. He was everywhere he said he would be, he was on time, and he tried so very hard to show Jill how much he loved her in the small amount of time that she gave him.

One day, Jack ordered red meat. Jill hated red meat. It took forever to chew and was hard to digest. She was so frustrated by the experience that she told Jack, next time, they would meet at a different restaurant where they always served simple, fast food. After a few weeks of meeting at the new restaurant, the host made a comment to Jill about her relationship with Jack. She was so mortified that someone would dare to judge her that she, once again, told Jack they would be meeting at a different restaurant. This time they met at a place her friends had suggested. They told her that the ambiance was hip, the food was easy to digest, and the hosts always made you feel like your marriage was perfect, just because you ate there. Jack just wanted to love his bride and help her see how beautiful she really was. So, Jack met her there and tried to connect with her, in spite of all the distractions.

After their date was over, Jill would give Jack a quick kiss and rush to her vehicle so that she could get back to any one of her many other obligations. Sometimes it was a game, sometimes it was meeting friends, and sometimes she just wanted to go home and nap. Jack held on to the kiss that his bride had left him with and wondered why she refused to accept the fullness of his love.

Eventually, Jill completely skipped her date with Jack. She was invited to go camping with some friends and decided that she couldn’t let her relationship with Jack interfere with her life. He called her, wanting to know why she missed their date. She loved him, but she didn’t think that married couples really needed to spend regular time together to prove that they were married or that they loved each other. She could love him from camp, or wherever, and if Jack couldn’t understand that, then the problem was with Jack.

Jill would often tell her friends that she was married but that they shouldn’t worry. After all, she didn’t let her marriage interfere with her life like some brides did. She sure as heck wasn’t going to push marriage on her friends. For Jill, marriage with Jack was nice, after all he was always there when she fell, and he had a great retirement plan; however, she just wished that he didn’t want so much of her time. An hour a week was a lot to ask. At one point Jack even suggested meeting twice a week. How needy could he get; didn’t he have his own life?

Husbands, love your wives, just as Christ loved the church and gave himself up for her to make her holy, cleansing her by the washing with water through the word, and to present her to himself as a radiant church, without stain or wrinkle or any other blemish, but holy and blameless. Ephesians 5:25-27 (NIV)

If you have a Biblical question, comment, or concern, please feel free to email me at raul@lavistanaz.org.

To find out more about La Vista Church, or to hear this and other messages, visit our website at www.lavistanaz.org. Follow Pastor Raul on Twitter @RaulGranillo007