Partridge: Veterans Are Impacted By Cancer 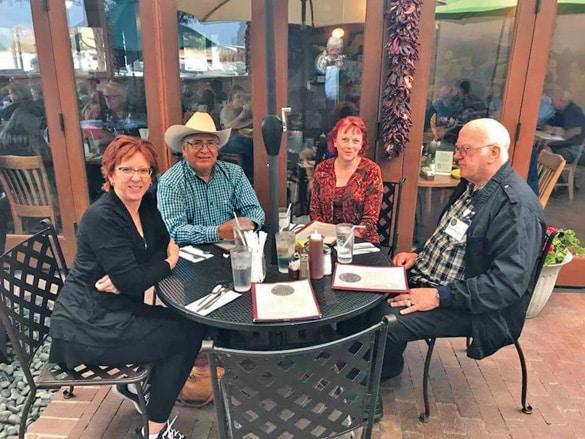 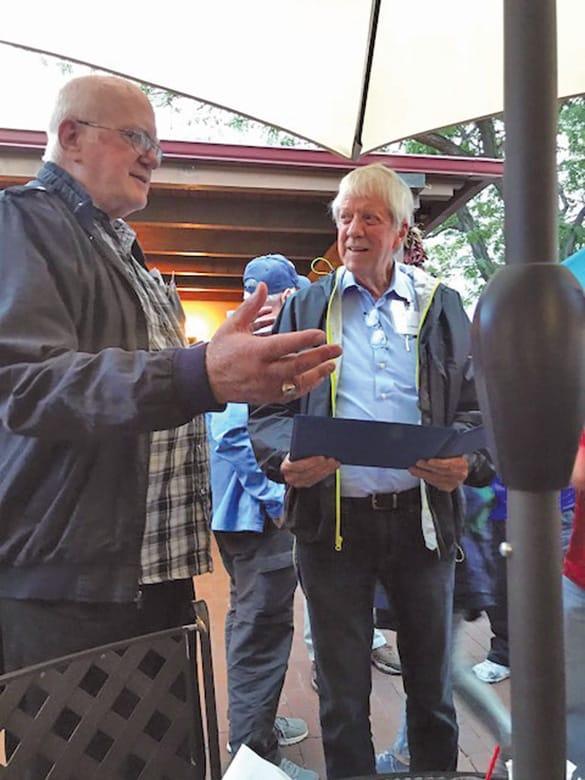 Two years ago Jim Nesmith and I were in CB Fox discussing merchandise to support fundraising for the effort to get a Virginia Class submarine named USS Los Alamos.

As we were leaving the store, we ran into a man who was wearing an old USS Los Alamos cap – not one of ours which show the boat number as TBD, but one with AFDB-7 on it. The original USS Los Alamos was an advance base sectional dock for repairing submarines off the coast of Holy Loch, Scotland, in service from 1961-1994. (Link to the story of that surprise meeting https://www.ladailypost.com/content/surprise-meeting-uss-los-alamos-counterparts)

Two years to the day since Jim Nesmith and I ran into USS Los Alamos Veteran Jim Jones, I was honored to join the veterans of the original USS Los Alamos for dinner at Tomasita’s.

Bonded by service, which extends back past when I was born, these men stay in touch on Facebook and gather every few years to reminisce.

I was supposed to join the veterans for the dinner and dance at the Sheriff’s Posse shack on Saturday night; however, my feet were too sore to dance after an 18-mile training walk. I missed an opportunity to spend more time with these honored veterans in preference for spending the evening soaking my aches away in a tub of Epsom salts, sea salt and baking soda with a touch of lavender oil.

The cancer rate for veterans is disproportionate to the military service rate. On average, only 0.4 percent of the U.S. population serves in the military.

Gulf War veterans are now the largest population of veterans. Their numbers passed those of Vietnam veterans in 2016. As of last year, there were 7.1 million who served in the Gulf War era and 6.8 million American veterans who served during the Vietnam era. The USS Los Alamos AFDB-7 crews span both eras.

Breast Cancer is not that common among veterans, predominantly because of the preponderance of males in the military. Nine-in-10 veterans (91 percent) are men while 9 percent are women, according to the VA’s 2016 population model estimates.

However, the VA is seeing increasing numbers of woman Veterans. VA researchers are beginning to look closely at breast cancer, its causes, and treatments for the disease. Among women Veterans, breast cancer is the most commonly diagnosed, accounting for about 30 percent of female cancers.

The VA first began studying cancer in 1932 when it established a cancer registry. In 1950 the VA established a link between smoking and cancer. In 2012 the VA demonstrated that observation is as effective as surgery in treating early-stage prostate cancer.

A 2015 study, conducted at the Kansas City, Missouri VA Medical Center, found that low-dose aspirin can impair the ability of breast cancer cells to renew themselves.

The VA researchers tested breast cancer cells in mice, and found that a daily dose of low-dose aspirin almost halved tumor growth in the mice’s tumors by altering the molecular signature in breast cancer cells—and those cells it failed to kill were unable to grow.

According to the National Institutes for Cancer, multiple studies over the past two decades have come to the conclusion that aspirin may reduce cancer rates, with an emphasis that aspirin may play a role in reduction of colorectal cancer risk.

The studies have also shown that aspirin’s protective effects against cancer may depend as much on biological factors as on cancer type. Some studies, for example, have suggested that aspirin may not be as effective at preventing cancer in women as in men.

About the author: Nancy Partridge is a native of Los Alamos. She learned to walk about a year after being born at Los Alamos Medical Center.

To register for the Aug. 25 American Cancer Society Los Alamos Relay for Life, go to https://www.facebook.com/American-Cancer-Society-Relay-for-Life-Los-Alamos-1764630063803786/ ; or
if you are interested in donating to the breast cancer fundraising walks go to: www.the3day.org/goto/NancyPartridge (Susan G Komen 3-Day 60-mile walk in Seattle Sept. 14-17); or
http://main.acsevents.org/goto/npartridge (Avon & American Cancer Society Making Strides Against Breast Cancer Oct. 6 in Santa Fe.