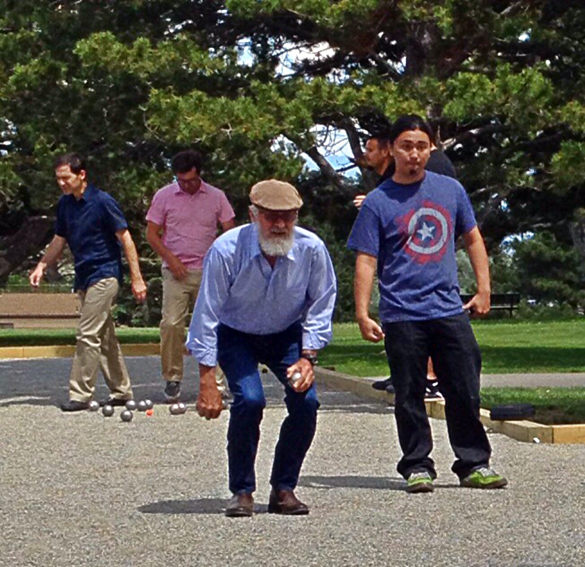 The new courts are on the north end of the park off Urban Street. Registration is $5 per player and begins at 8:30 a.m. Extra boules will be available if needed.

Several random qualifying rounds will be played in the morning, with concours and consolante brackets in the afternoon. Medals and cash prizes will be awarded at about 3 p.m. at the end of the event.

Water and facilities are available at the park. Participants are encouraged to bring snacks or potluck dishes to share. The venue also allows responsible consumption of your preferred refreshment. For more information, contact Todd Haagenstad at (505) 690-3374.

For the uninitiated, Pétanque (pronounced “pay-tonk”) is one of the world’s most popular outdoor recreational sports. It is a cousin of both horseshoes and the Italian bowling game of bocce. The game originated in the South of France in the early 1900s, is very well known all over the world, and has recently become increasingly popular in the United States – particularly in New Mexico and Colorado.

The aim is to toss, or roll a number of hollow steel balls (“boules”) as close as possible to a small wooden target ball, called “cochonnet” (French for “piglet”). Players take turns and the team that ends up nearest to the target ball when all balls are played, gets a point for each of the closest boules, and wins the match. Matches continue until one team reaches 13 points.

No special skill is required, adults can play with children, and the equipment is very inexpensive. It can also be a highly competitive sport that requires a high degree of skill and years of experience.

“The sport of pétanque is simple, relaxing, lots of fun, and a perfect way to make new friends,” organizer Todd Haagenstad said. “No wonder this extremely pleasant recreational sport is rapidly gaining popularity worldwide – and now in Los Alamos. Last but not least, pétanque is usually played while enjoying potluck style snacks, a cool drink and plenty of fresh air.”