Parks And Recreation Board Updated On CIPs 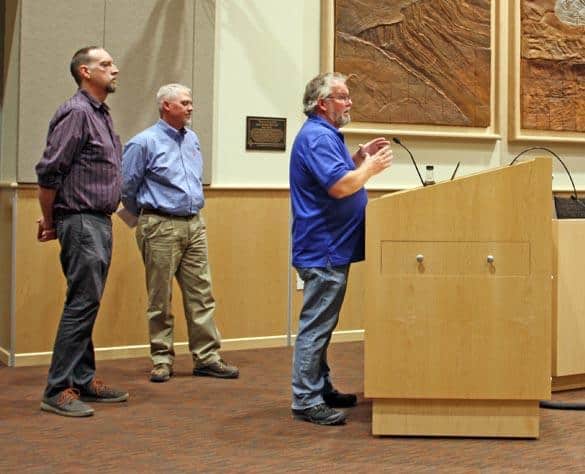 The recreation capital improvement projects are moving closer and closer to fruition. The Parks and Recreation Board received an update on the design plans for the Los Alamos County Ice Rink, Los Alamos County Golf Course, splash pad and kiddie pool during its regular meeting Nov. 14.

Ice Rink
Public Works Project Manager Wayne Kohlrust updated the board on the ice rink. A configuration was developed for the locker rooms as well as the restrooms, he said, adding that a building profile for the exterior was created along with structural provisions to accommodate a future potential observation deck—a request made at a prior public meeting.

Kohlrust said the Planning and Zoning Commission approved a site plan amendment for the new, expanded locker room facility. The square footage will increase from 700 square feet to 2,300 square feet.

Additionally, he said the architects have submitted the 60 percent design package, which staff is reviewing. Construction bids are expected to be issued by the end of December with construction scheduled to start March 1. The hope, Kohlrust said, is to have the project completed by Oct. 31, 2020.

“It’s going to be a real fun project,” Kohlrust said. “I was a hockey coach for about nine years, so this has been something that is kind of near and dear to my heart and I’ve been very happy to be chosen to run this and looking forward to the improvements.”

Golf Course
Jeff Stewart and Jeff Goode of MRWM Landscape Architects and Irrigation Services, LLC, touched on the details of the new sprinkler system that will be installed in the golf course.
Goode touched on some features of the irrigation system. He said there will be about 1,440 sprinklers in the entire system. The entire turf edge will be surrounded by park service sprinklers, which allows the water to be targeted solely on the grass and not areas that don’t need water.  He added if the County needs to take water saving measures due to draught, the edges of the course could be eliminated from irrigation.

Additionally, if there is a problem with the main water line or if there is a break in the main line, Goode said 11 isolatable zones have been developed. This allows golf course staff to shut down the effected zones and still provide water to the rest of the course.

“We think that is going to be a great feature for the maintenance department,” Goode said.

Attention also was given to sprinklers. Goode said anytime a sprinkler is damaged, there is a potential to get a water geyser. Therefore, Goode said all 1,400 sprinklers are divided into groups and these groups can each be turned off with a valve. This lessens the emergency factor because large areas of the course will not be shut off from water, he said.

“It maximizes the efficiency,” Goode said.

Stewart touched on the budget for the golf course project.

Therefore, depending on how construction bids come in, there may be about $84,000 left in the project budget, which could be used for add-ons, Stewart said.

As far as the schedule, the construction documents are expected to be finalized in December and the construction bids should be awarded in March. The first phase of construction will be March through June and the second phase will begin in August. The project is estimated to be completed in November 2020.

Board member Timothy Johnson said he would like to see other course improvements be considered in addition to the irrigation  system.

“This project has certainly been considered for quite some time,” Johnson said. “There’s a lot of background work that has been done … obviously the irrigation system needs to be replaced; it’s a big piece of all this (but) … the course improvements can be the thing that changes that facility for the better. They are an important piece of this whole project for sure.”

Staff is working on an RFP to identify, prioritize and design other improvements to the golf course discussed at previous CIP budget programming meetings.

Kiddie/Multigenerational Pool
Regarding the pool addition to the Larry R. Walkup Aquatic Center, the one thing many have said is that they would like to see more, County Project Manager Steve Huebner said.

“There were a lot of comments from the public about more,” he said. “Wanting more deck space, more space for parents, furniture, seating area, more restrooms and we recorded those comments and the design team has been working on incorporating that as much as possible, but we are limited by a $6.5 million project budget.”

The 60 percent design development phase of the pool is in process.

The project will feature the following:

There had been questions about the occupancy of the new pool, but it will hold 235 occupants.

Construction is expected to begin in May and last about a year.

Splash Pad
The splash pad also is taking shape and after a lengthy discussion, the board passed a recommendation that Council approve a flow-through water system for the splash pad rather than a re-circulating system.

Abigail Feldman of Surroundings presented the plans for the splash pad, which will be located near Rover Park in White Rock.

The size of the pad grew. Feldman said it increased from 673 square feet to 1,270 square feet.

“It has doubled in size,” she said.

Similar to the pool, the public’s comments for more features were incorporated into the design with consideration given to the overall budget. Feldman said in response to people’s concerns about dogs making their way through the splash pad, the design allows for people to bypass all the water features with their animals. Additionally, she said the size of the lawn was reduced and the splash pad was expanded. Some seating will be provided with a wall made from refurbished concrete of the old shuffleboard pads. Plus, Feldman said large umbrellas will be used to give shade.

Originally, the public was asked for its preference on a theme for the splash pad.

Feldman said they were given two options: a science and a nature theme. There was no clear winner, so she said the two themes were combined.