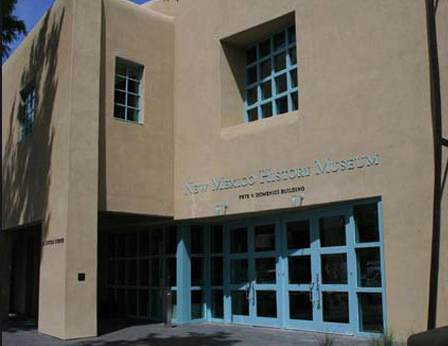 Visitors can still visit via the History Museum and Palace Courtyard

Santa Fe—A long-awaited maintenance project to refinish or replace some of the floors in the entryway of the 400-year-old Palace of the Governors will temporarily inconvenience visitors accustomed to entering themuseum complex through its doors.

As of Friday Nov. 2, the Palace doors facing the Santa Fe Plaza are closed as workers begin deconstruction in the entry and front-desk area.

Visitors are asked to come in through the New Mexico History Museum, just around the corner at 113 Lincoln Ave.

The work is expected to be completed within 60 days. Conron & Woods Architects and Lockwood Construction, both of Santa Fe, are overseeing the project.

The floors being worked on are not part of the building’s historic fabric but were installed during a 1976-1978 rehabilitation project—and have thus far held up to the building’s more than 100,000 annual visitors. State of New Mexico Capital Improvement Funds are paying the $21,090 cost.

Note: In all likelihood, this will cause a ripple in the annual Christmas at the Palace event on Friday, Dec. 7. We’re still working out details, but participants may be asked to enter the event through the Palace Courtyard on Lincoln Avenue. Some areas of the Palace may be closed, but we’ll still have hot cider, biscochitos, musical performances, and visits with Santa.

Construction on the Palace began in 1609, and the building has seen numerous renovations throughout its lifetime.

It originally served as the seat of government for Spain’s northernmost colony and later housed Mexican and Territorial governors and, briefly, the Confederate Army. It became New Mexico’s first museum in 1909 and is widely considered the oldest continuously used government building in the nation.

“The first time anyone spent a night in the White House, the Palace was nearly 200 years old,” said Dr. Frances Levine, director of the New Mexico History Museum. “That makes caring for a National Historic Landmark one of the most important things we do. Through this work, we help extend its lifeline and ensure that the stories it has witnessed over 400 years continue to be told.”

The work is not expected to disrupt the Native American Artisans Program under the Palace Portal.

Exhibitions within the Palace are still open to visitors, including Santa Fe Found: Fragments of Time andTesoros de Devoción (Treasures of Devotion.)