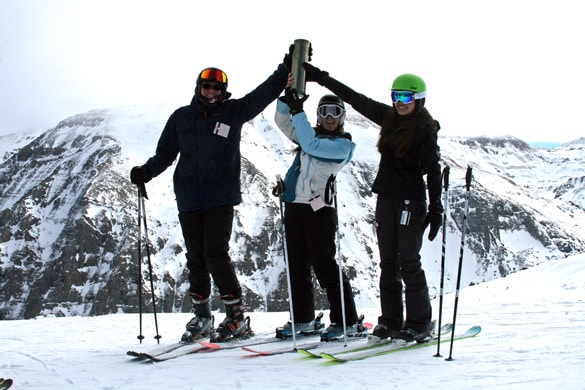 Pajarito Mountain Young Adult Ski Patrollers, from left, Jon Doorn, Elyse Phillips and Natalie Aulwes celebrate the gift of a 105mm Howitzer spent shell casing that was given to them by the Telluride Ski Patrol. The high explosive round was used to make the slopes safer for the skiing public at Telluride Ski Resort. Photo by Eric Schaller

The Jamboree is a ski patrol training conference for high school aged ski patrollers from all the ski areas within the Rocky Mountain Division of the National Ski Patrol. The YAPs participated in training and demonstrations of avalanche risk mitigation and rescue, mountain travel and rescue techniques, and trail safety programs.  Pajarito Mountain YAPs joined YAPs from Sandia Peak and Loveland, Hesperus, Powerhorn and Winter Park, Colo. for the event.

Saturday started with a morning tour of Telluride’s Snow Safety and Avalanche Control Program. Snow safety supervisor Jon Tukman lead a tour that started at Patrol Headquarters (PHQ) and then traveled to the high ridges where he explained some of the details of Telluride’s avalanche risk mitigation program. Tukman described the hard and dangerous work and early mornings that the Telluride Ski Patrol must endure to make the slopes safer for the skiing public. He also described the use of explosives to trigger avalanches prior to any public being present on the mountain. One of Telluride’s compressed gas avalauncher cannons, and one of their 105mm Howitzer artillery pieces were included in the tour. The Telluride Patrol gifted a spent Howitzer shell casing to each of the YAP programs present at the Jamboree.

On Saturday afternoon, representatives of the National Ski Patrol Mountain Travel and Rescue (MTR) program gave the YAPs short introductory clinics in improvised splinting, emergency shelter building in a winter environment and the 10 essentials to carry in order to survive a back-country emergency. At the end of the ski day the YAPs were treated to a tour of Wagner Custom Skis, a small-scale operation in Telluride that manufactures skis for the precise needs of the individual.

On Sunday, the YAPs observed a demonstration of some of the Telluride Ski Patrol’s avalanche rescue capabilities. Avalanche rescue dogs Sadie and Stella stole hearts while showing off their skills by locating YAPs who volunteered to be hidden in snow caves in a simulated avalanche run-out zone. Pajarito mountain YAP Elyse Phillips was all smiles after being located and “rescued” by Sadie in less than two minutes after the dog’s release.

After the rescue dog demonstration, Telluride Trail Safety Manager Pete Sweeney and Assistant Risk Management Manager Mel Ashley took small groups of YAPs around the mountain and showed off how Telluride uses a program of simple signage and direct public education to mitigate risks to the skiing public that stem from potential problems such as excessive skier speed, merge points and trail crossings.

On their way back to New Mexico, the Pajarito YAPs still had the energy to visit Purgatory Ski Area for a few turns. All the Pajarito YAPs returned safely to Los Alamos on Monday night, both better educated and more experienced in a wider world of ski patrolling. The Pajarito YAPs would like to thank the High Altitude Athletics Club and the Atomic City Road Runners for their help in fundraising for the Pajarito Mountain Young Adult Ski Patrol program.

Adult leaders for the trip were David Phillips, Kathy Brooks and Eric Schaller. 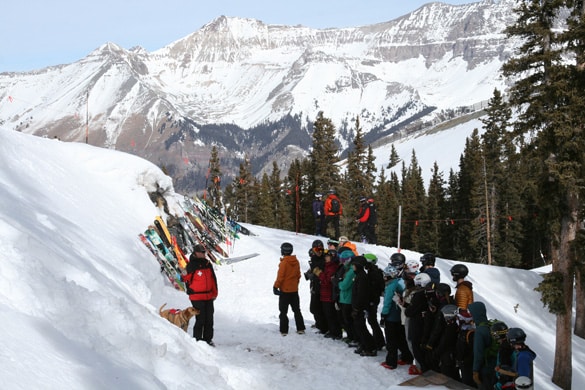 YAPs from all around the Rocky Mountain of the National Ski Patrol wait patiently as the scent of one of their peers who is in a snow cave on the slope to the left dissipates. This will make the avalanche rescue simulation more difficult and more realistic for ‘Avi dogs’ Stella and Sadie.

YAPs from the Rocky Mountain Division of the National Ski Patrol wait patiently as the scent of one of their peers who is in a snow cave on the slope to the left dissipates. This will make the avalanche rescue simulation more difficult and more realistic for Avi dogs Stella and Sadie. Photo by Eric Schaller 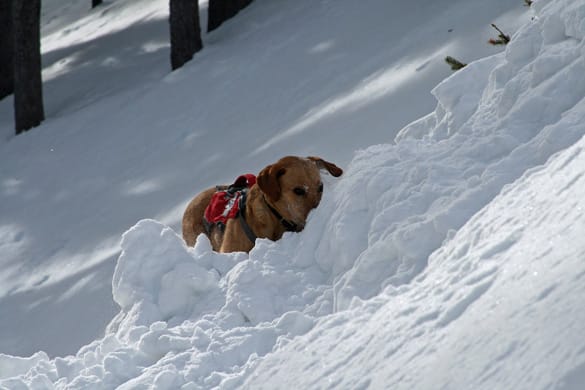 Telluride Avalanche rescue dog Sadie locates Pajarito YAP Elyse Phillips who is under the snow in a snow cave. This practice allows these Avi Dogs to keep their skills sharp in anticipation of an emergency. Sadie located Phillips in less than two minutes. Photo by Eric Schaller 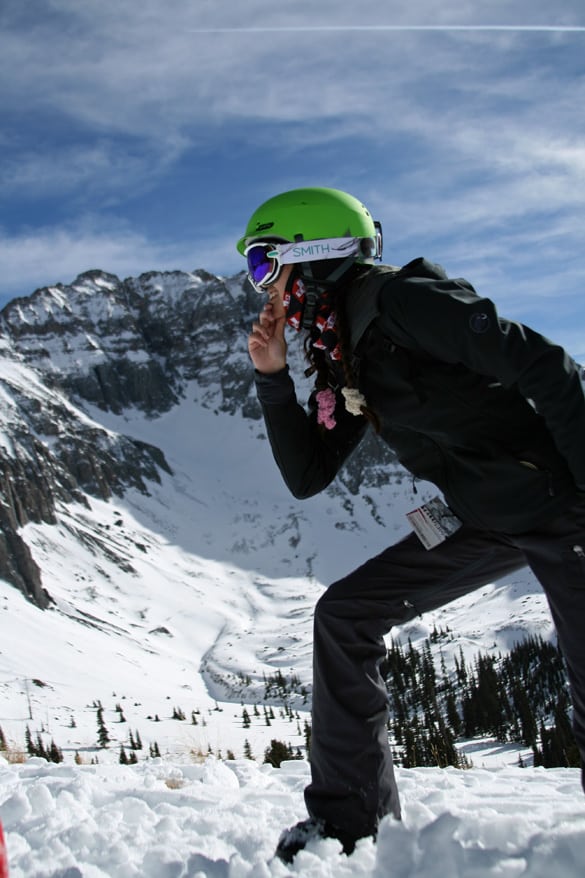 Pajarito YAP Natalie Aulwes contemplates her next run at Telluride during the 2018 YAP Jamboree. Photo by Eric Schaller