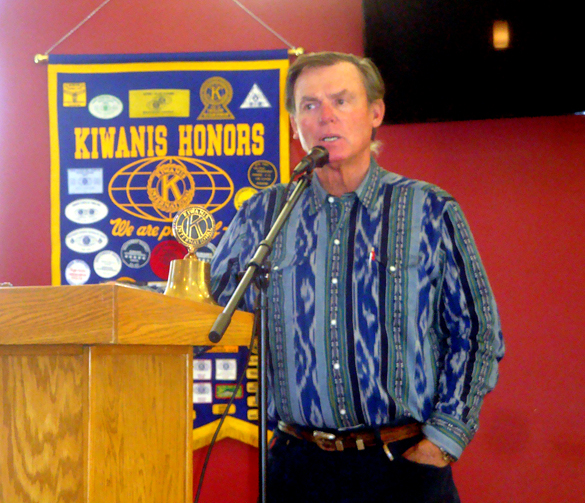 Tom Long, general manager of Pajarito Mountain Ski Area and director of the hill’s ski school, visited Kiwanis recently, speaking on the history of the ski area and plans for its future.

Long was born in the Boston area, but during this coming ski season, he will mark 50 years of continuous full-time service in the ski industry in New Mexico.

“In 2004, I was presented the opportunity to become the general manager of Pajarito Mountain Ski Area. Currently, I am also the director of the ski school, filling both positions at the ski area. I’ve been heavily involved in all aspects of ski area operations—rental operations, lift operations and maintenance, grooming, cafeteria operations, and the myriad of other activities involved in the operation of a ski area. I was awarded lifetime membership in the Professional Ski Instructors of America organization, and I’ve been inducted into the New Mexico Ski Hall of Fame.”

Long looked back over the history of the Los Alamos Ski Club and commented, with a grin, “Being in the ski business has its ups and downs.” The Ski Club began during the Manhattan Project, and at one time, the club had 4,000 members, but now, he said, it is down to about 2,000.

Several years with little snow led to a decision to build a snow-making system, but initially, there was “no sustainable water source.” The club built a pond and put in a system to capture runoff, but essentially, no rain or snow came.

“Lack of snow and the (2001 Las Conchas) fire hurt seasons,” he recalled. “We lost 300 acres to the fire and two lifts, but the lifts were rebuilt.” The club is “trying to mitigate” the damage to the forest, and fortunately, “Mother Nature works miracles,” he said.

Here’s how it stands now, he said: