Pace Race Has One of Its Best Turnouts Ever Tuesday 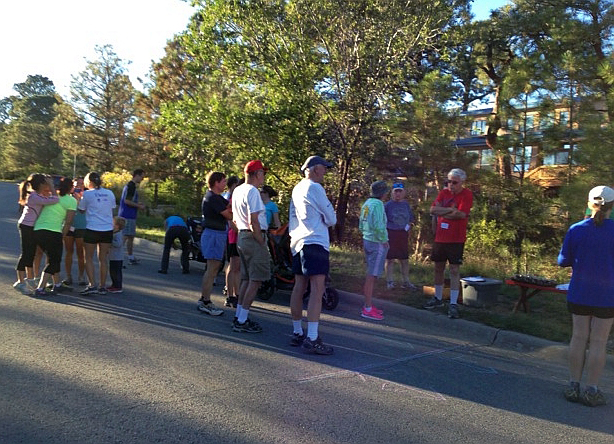 In one of the best turnouts in recent memory, 47 runners and walkers enjoyed a warm dry evening for the one, two, three and four mile pace race courses on Barranca Mesa. All finishers were treated to cool watermelon.

In the one mile course around Navajo, Los Pueblos and Barranca Roads, Patricia Burnside had the best prediction, only 15 seconds off. Duane Marr was right behind her at 18 seconds off his prediction followed by Roy Cope who was 78 seconds off of his prediction. Anders Medin was the youngest running of the night, at four years old and he beat his predicted time by 99 seconds.

In the three mile road course around Navajo, down almost to the end of Los Pueblos and back around Barranca Road, Nikol Struther had the best prediction of 43 seconds off followed by Amanda Mercer at 72 seconds off of her prediction. The next best predictor was Rao Garimella at 148 seconds off his prediction.

Seventeen runners took on the challenge of the 4.13 mile Deer Trap Mesa loop trail that Craig Martin and the Youth Conservation Corps recently established. The tips of three mesas were reached for some great views. Numerous blooming yucca plants encouraged the runners along the trail as did some cactus. Zack Medin was the best predictor at just 16 seconds off his prediction, followed by Lynn Bjorklund at 25 seconds off and Amy Regan at 38 seconds off.

Next Tuesday night’s pace race begins at 6 p.m. at East Park. For information, call 505.672.1639 or visit the Club’s website http://www.atomicrunners.com.