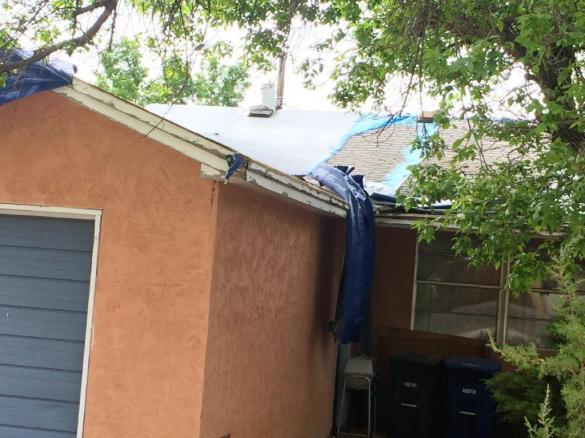 Photo taken last month showing the condition of the roof on a Kayenta Drive home, which has resulted in five citations over the last three years for owner Jay Stimmel. Courtesy photo 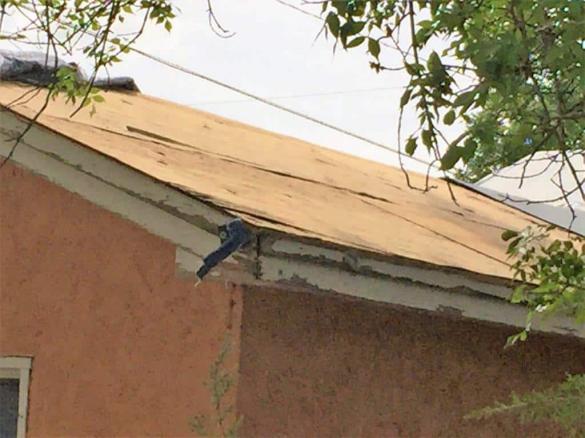 After three years of hearings in a case involving replacement of a roof on a home on Kayenta Street in White Rock, Los Alamos Municipal Judge Alan Kirk finally seemed to have had enough during Monday’s court hearing on the matter. Homeowner Jay Stimmel is charged with having a roof in disrepair in five separate cases related to this residence.

Last August, Judge Kirk gave homeowner Stimmel until Oct. 31 to finish replacing the roof and issued him fines of $500 in each of four separate citations but suspended most of those until Oct. 31. As part of the judgment and sentencing imposed, Stimmel was required to submit to the County’s Community Development Department and Chief Building Official Michael Arellano photographic evidence and other documentation showing his progress in the replacement of his roof. The documents were to be submitted every two weeks from the date of the judgment and sentencing, with the first being due Aug. 28.

At that time, Arellano estimated that the project could have been completed in a day and a half and that the tarps being used are not rated for UV rays or appropriate for protecting the roof. He also said the roofing materials stacked on the roof at that time were a safety issue. In November, Judge Kirk held a status hearing and because the roof work had not been completed and the required updates were not given to the CDD as ordered, Stimmel was ordered to pay the suspended portions of his fines to the Court. A new notice of violation was issued to Stimmel Dec. 17 and he pleaded not guilty Jan. 8 in Court.

At Monday’s hearing, Assistant County Attorney Kevin Powers told the Court that no further work has been done on the roof and that conditions have continued to deteriorate. He said many of the tarps that were placed on the roof have shredded and have been flying into adjacent properties and public property behind Stimmel’s property.

Stimmel told the Court he has been unable to work under the most recent permit he was issued because he County has refused to extend it and he believed it could be extended for two years. He claimed the tarps on the roof were kept in good repair until February when he had knee replacement surgery and that when he recovers he will be back on the roof.

Code enforcement officers Larry Valdez and Michael Marquez testified on behalf of the County as well as Stimmel’s neighbor Madeline Boyd who complained of the condition of the house and that it is affecting property values in the neighborhood. Boyd said it needed to be resolved “both for the practical standpoint and for the cost”.

Powers told the Court that this is an ongoing violation and that more cases are forthcoming because “nothing has been done” in the current case.

“We have neighbors trying to do the right thing and this just continues, continues, continues,” he said. “With a home comes responsibilities. Mr. Stimmel is not maintaining his home in a proper way in accordance with County standards, the building code and code enforcement.”

Stimmel told the Court that nobody wants the house done more than he does. He said his medical bills are atrocious and that it is unfortunate that his medical expenses started escalating before the start of the roof issue. He said all he is asking is that the County extend the permit, which he said they have chosen not to do, so that he can move on and get back to work on the house. He said he feels bad that due to knee surgery he couldn’t get up on the roof and that his neighbors had to “put up with this”.

Powers responded saying no proof of any medical issues had been entered into evidence by Stimmel.

“Time after time, effort after effort, we have subpoenaed witnesses, we’ve been here for trial. He’s had tons of time. He has simply given no cooperation to anyone other than himself and we have all borne his responsibility during this time,” he said.

Powers said the Court has given Stimmel adequate opportunity and chance, that in the previous cases the permits were extended and nothing at all had happened.

“And here we are again asked for more time, asked for more cooperation. We have done that. We have done everything in our power to give Mr. Stimmel opportunities and we have gotten nothing at all in return,” he said. “At this time, he has done nothing to show us he is really willing to move forward.”

Powers said under the law the permit has expired and the County can’t grant an extension. He said that the fees can’t be waived, that they are required for everyone.

In response to a question from Judge Kirk, Stimmel admitted that he had not lived in the home since 2011 to 2012. Judge Kirk told him Stage III fire restrictions are in effect and the town “is in a lockdown”.

“I look at a house that has exposed plywood with no shingles attached. It’s scary! The patience of your neighbors has been phenomenal. I just think the risk you are putting their property in is unacceptable. I don’t know where someone gets off thinking they can penalize their neighbors and continue to provide the Court with excuses after excuses without consequences. I’ve bent over backwards to get you to get this resolved. I think I’m on this now for three years and to hear from one of your neighbors that they’ve been handling it for longer than that,” Judge Kirk said.

Judge Kirk said abandoned properties are a danger to the community. He discussed the process that allows the County to go in and clean up a property and put a lien on it. Stimmel said he is worn out and asked the Court to postpone the scheduled hearings for two weeks and give him a chance to get two bids to finish the roof.

“You have to understand, this is a December case, and this is June. We’ve been trying to get you in here for months. We’re not dragging on this,” Judge Kirk responded.

He said he wanted to be fair in getting the issue resolved but that Stimmel is not helping him.

“It’s just disregard for all the people who have worked with you and you continually show a lack of interest in getting this resolved,” Judge Kirk said. He listed ways for Stimmel to seek funding from state and county resources to help fund the work on the roof if Stimmel could not afford to pay himself.

“I guess I’m on a bit of a pulpit here and it’s time for me to back off, but this is ridiculous, and I sympathize so much with your neighbors of that abandoned property down there and it needs to be dealt with,” Judge Kirk said.

Powers told the Court that apparently monetary fines “are not doing it”. He said the County is suggesting jail time and that he knows how hard that is for the Court and the community to take. He said the penalty is 30 days in jail and/or a $500 fine and told Stimmel he can report on a Friday and do a weekend in jail just to show that the Court is “serious about this”” and that he can get out on Sunday evening and go back to work.

“I think that’s the only option we have to show Mr. Stimmel we’re very serious. There’s nothing to date, not even after $2,000 and four guilty (verdicts) and now a fifth and we’ve got more coming. I don’t think anything will impress Mr. Stimmel any further. I hate to do that. I don’t think for a code violation that should be appropriate, but I don’t know anything more that I can do, or we can do as a county to have this individual understand that this is an important value. It’s a fire, health, life and safety risk for everyone around him and for him not to recognize that, I don’t more that we can do,” Powers said.

Powers asked for an administrative order to go into the property to see the internal condition.

Stimmel said he realized he was going to somehow have to get the money this week because he realizes he just physically can’t do it anymore. He said he thought he could finish up the roof and that he would have to use the same stubbornness to find financing. He told the Court he would have to submit two estimates by Friday so that he could go forward from there. He said, “The County doesn’t need to put me in jail because that’s “not going to fix anything.”

Judge Kirk continued sentencing until Monday, June 25 on condition that Stimmel provides two bids by Friday to the court with plans for moving forward.