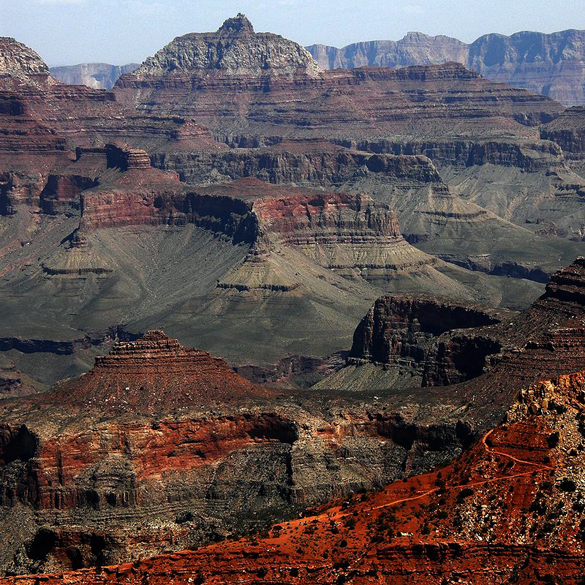 Grand Canyon from the South Rim, near the NPS Visitor Center. Courtesy/Wikimedia
EarthJustice News:
FLAGSTAFF, AZ — More than 200,000 people flooded the U.S. Forest Service with comments over the last month calling for the agency to reject a plan for roads and infrastructure that would enable construction of a mega-development on Grand Canyon’s doorstep.
The proposed roads, sewers and other utilities would pave the way for a multinational developer to transform the 580-resident community of Tusayan, Ariz. from a small, quiet tourist town into a sprawling complex of high-end homes, retail stores, and restaurants only a mile from the Grand Canyon National Park boundary. The development threatens groundwater that feeds Grand Canyon’s creeks, springs and seeps, endangering some of the Park’s most important and biodiverse wildlife habitat.
The outpouring of public opposition included business owners in Tusayan and nearby Flagstaff, a former Coconino County development director, a former Grand Canyon National Park superintendent, outdoor enthusiasts, and thousands of park visitors who want to keep the experience of visiting Grand Canyon unmarred by a massive commercial development. The Department of the Interior warned that the massive development was raising international concerns over the potential harm to Grand Canyon, a World Heritage Site.
“Building a massive sprawling development at the gateway to Grand Canyon threatens the very things that the park was established to protect―the waters, wildlife, dark skies, and opportunities to experience natural quiet,” said Sandy Bahr, chapter director for Sierra Club’s Grand Canyon Chapter. “That is why thousands of people here in Arizona and across the country are asking the Forest Service to reject this proposal.”
Commenters also noted that the project would increase car and plane traffic and light and noise pollution in Grand Canyon National Park. The National Park Service has called the project one of the biggest threats to the park in its nearly 100-year history.
“The Grand Canyon is one of our most beloved and iconic national parks―a sentiment that reverberated in messages of opposition sent by our members, supporters, and partners in Arizona and across the country,” said David Nimkin, Southeast Senior Regional Director for the National Parks Conservation Association. “Water is a precious resource in the park and throughout the west, and we call on the Forest Service to recognize the resources in Grand Canyon and the nearby Havasu Canyon that would be jeopardized, and reject this proposal.”
Earthjustice, on behalf of the National Parks Conservation Association, the Grand Canyon Trust, Sierra Club and the Center for Biological Diversity submitted a letter urging the Forest Service to reject the proposal or, at a minimum, to prepare a full environmental impact statement disclosing the impacts of the massive development on water, wildlife, air quality, traffic, crime and other resources and factors.
“The flood of opposition to this project shows that the public doesn’t want Grand Canyon’s unparalleled natural values given away to developers hoping to cash in on its popularity,” said Chris Eaton, an Earthjustice attorney.
“The local, national and international communities have spoken, and the message is clear — this development doesn’t belong next to Grand Canyon,” said Robin Silver, a founder of the Center for Biological Diversity. “Now it’s up to the Forest Service to act in the public interest and reject this proposal”
The comments and signatures included nearly 200,000 from members and supporters of conservation and advocacy groups including more than: 52,000 from the Center for Biological Diversity; 55,000 from Earthjustice; 13,000 from the National Parks Conservation Association; 30,000 from the Sierra Club; and 50,000 from the activist website RootsAction.org.
The Forest Service will review the public’s comments over the next month or two and then decide whether to reject the application outright, proceed with a minimal “environmental assessment” with little public review, or prepare a more rigorous environmental impact statement. An environmental assessment would likely take up to a year to complete; an impact statement would take twice that long.
Menu
LOS ALAMOS