‘Opera On The Rocks’ At Bandelier Sept. 24 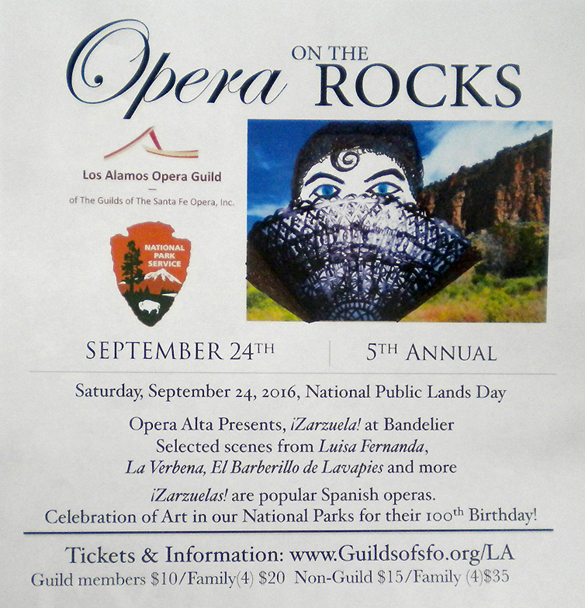 For the fifth year, the Los Alamos Opera Guild of The Guilds of The Santa Fe Opera, Inc., Atomic City Transit and Bandelier National Monument are presenting “Opera On The Rocks” at the Juniper Campground Amphitheater. This year it will be the evening of Saturday, Sept. 24.

Due to very limited parking at Bandelier, those attending need to come by free shuttle bus from either Sullivan Field in Los Alamos or the White Rock Visitor Center on N.M. 4. Buses will depart between 4-4:30 p.m., returning at approximately 8 p.m. Exceptions are vehicles with disability placards.

Zarzuelas are considered the most popular form of Spanish opera. When done as a complete production, they are usually quite elaborate, with lavish sets and large casts, and usually consist of two acts. Unlike other forms of opera, most have spoken dialog between portions that are sung. The earliest ones date from the 1700s, and some are comic, while others are serious drama. The excerpts to be presented at “Opera On The Rocks” include ones from Luisa Fernanda, La Verbena, El Barberillo de Lavapies, and more; most of these are from the 20th century. Unfortunately the Bandelier stage isn’t sizeable enough for these productions to be done lavishly, but the singing and the outdoor setting will make up for it!

As world-renowned Spanish tenor and conductor Placido Domingo said of Zarzuelas, “They are a very precious part of our heritage and it is a joy to find that an increasing number of music and theater lovers around the world respond to Zarzuela.”