Open The Door To Understanding Opera 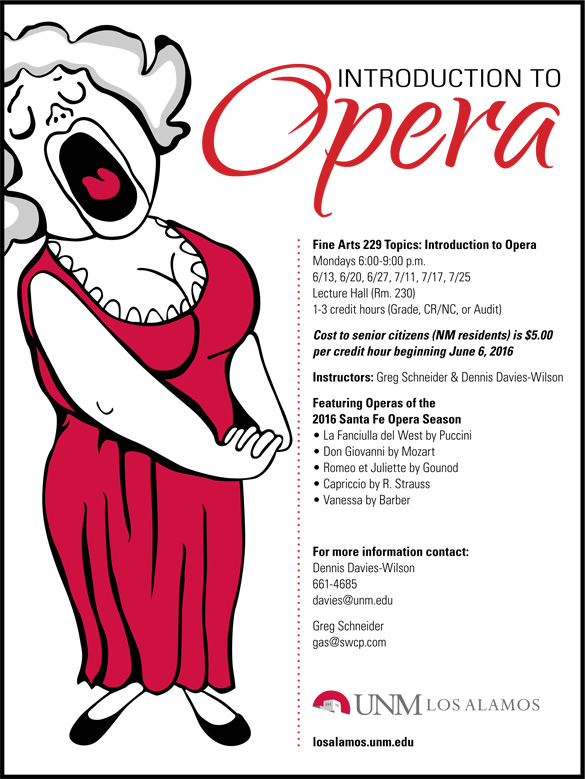 For those who are curious about opera, or wishing to understand the allure of the world famous Santa Fe Opera or Bandelier National Monument’s annual Opera on the Rocks, this is the perfect learning opportunity. The initial class will provide an overview of the subject, then each subsequent class will focus on one of the operas of the 2016 Santa Fe Opera season. There will be two opportunities to attend dress rehearsals as well.

Davies-Wilson began teaching the class in 1999, and has now been co-teaching with Schneider for 10 years. Davies-Wilson is an opera aficionado who has listened to his favorite operas hundreds of times. During the first session he will discuss opera periods, styles and characteristics of opera, such as voice types, what happens behind the scenes and the production hierarchy. Schneider developed his love for opera while working backstage at the Santa Fe Opera, and he shares that insider’s perspective with the class.

To study an opera, Davies-Wilson and Schneider will share historical background about the composer and the opera, highlight musical aspects and weave video clips within the context of the discussion. Davies-Wilson describes the approach as providing “a synopsis with video highlights.”

This is the 60th season at the Santa Fe opera, and the productions include:

“La Fanciulla del West,” or “The Girl of the Golden West” by Puccini is set in the American West in a saloon, during the Gold Rush era. Puccini was inspired both by a production of “Buffalo Bill’s Wild West” show that he saw during its Italian tour in 1890, and a performance of David Belasco’s play, “The Girl of the Golden West” that he saw in New York in 1905. Davies-Wilson jokingly calls this “a spaghetti western in the operatic sense.”

The Strauss “Capriccio” is an opera about opera production. What’s more important, the words or the music? That’s the crux of the theme, as the composer, the director, and the librettist all propose different presentations. Not surprisingly, there are some very comical moments.

Davies-Wilson holds a Bachelor of Music Education and a Master of Music in Music History and Literature from the University of New Mexico, and a Master of Library Science (Music Specialization) from Indiana University. He is currently Library Director of the UNM-Los Alamos library. A bassoonist, Davies-Wilson has performed in the Opera Southwest Orchestra and has been a guest bassoonist with the Santa Fe Symphony and the Sangre de Cristo Chorale. He also has performed on early instruments with Música Antigua de Albuquerque since 1988.

Schneider has more than 30 years of experience as a music educator and professional musician. He has a bachelor’s degree in music education (B.M.E.) from Indiana University, and a master’s and doctorate (M.M., D.M.A.) in composition from the University of North Texas. He has national and international experience as a performer and composer, and as an educator has worked with students of all ages. He is on the music faculty at the University of New Mexico-Los Alamos and has been an orchestra member with the Santa Fe Opera. He performs most often on the guitar.

Students may register for Introduction to Opera for either 1-3 academic credits or may choose to audit the course. Individuals over 65 may take the class for $5 per credit hour if there is still space available on the first day of class. For assistance with registration, call 505.662.5919.

For more information about the class, contact Davies-Wilson at davies@unm.edu.

For further information on this or other UNM-LA summer semester classes, visit http://losalamos.unm.edu or call 505.662.5919.