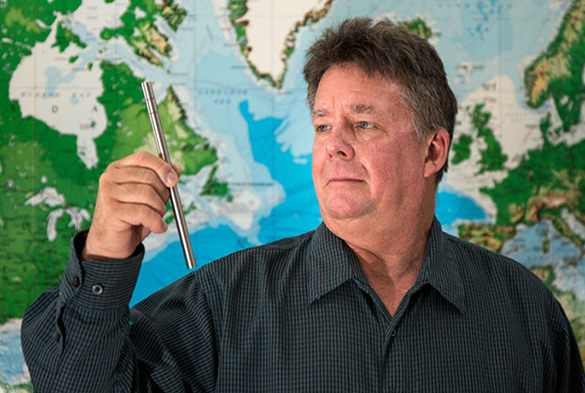 Rick Day of LANL’s International Threat Reduction Group and the Off-Site Source Recovery Project (OSRP) holds a non-radioactive training mockup of what a typical cobalt-60 source might look like. The source is similar to what OSRP team members recovered from a site in Maryland in late 2014, putting the number of Curies recovered as part of the project above 1 million since the project began in 1999. OSRP recovers and disposes of unwanted radioactive sealed sources, eliminating a potential threat that could be used by terrorists to create ‘dirty bombs.’ Courtesy/LANL

The accomplishment represents a major milestone in protecting our nation and the world from material that could be used in “dirty bombs” by terrorists.

“Taking disused, unwanted and, in limited cases, abandoned nuclear materials out of harm’s reach supports the Laboratory’s mission of reducing global nuclear danger,” said Terry Wallace, Principal Associate Director for Global Security at Los Alamos. “This milestone represents tremendous progress in removing a potentially deadly hazard from all corners of the globe. Los Alamos helped usher in the nuclear age, so it’s quite appropriate that this Laboratory continues to use its nuclear expertise to assist the DOE in stewardship of nuclear materials.”

Off-Site Source Recovery Project personnel recovered several high-activity sealed radioactive sources from a Maryland facility in November, which pushed the total recovered radioactivity above 1 million Curies. Los Alamos National Laboratory supports OSRP with instrumentation, expertise and personnel. With the Maryland recovery, OSRP has recovered and secured more than 38,000 sealed radioactive sources from more than 1,100 different locations, including all 50 states within the U.S. The particular source that achieved the 1-million-curie milestone was a small stainless steel capsule, about the size of a pencil, containing 100 curies of the radioactive isotope cobalt-60. This source was part of a larger 9,000-curie shipment that was characterized and verified before loading into specially shielded containers for safe transport to a secure location.

A Curie is a unit of radioactivity named after scientists Marie and Pierre Curie, who discovered, among other things, the element radium. One Curie is roughly equivalent to the amount of radioactivity in one gram of the radium-226 isotope.

NNSA’s DNN Radiological Removal Program and OSRP mission includes removal and disposal of excess, unwanted, abandoned, or orphan radioactive sealed sources that pose a potential risk to national security, public health, and safety. These sources include radiological materials from universities, and medical and research facilities worldwide that could potentially be utilized in a dirty bomb—an ad-hoc weapon created by rogue states or individuals to instill fear and disrupt activity in large population areas.

DOE initiated OSRP in 1999. Originally it was an environmental management project to recover and dispose of excess and unwanted sealed radioactive sources. In 2003, the project was transferred to NNSA DNN in a shift towards more aggressive recovery of unwanted radioactive sealed sources for national security purposes. Sealed source recovery and disposal efforts result in permanent threat reduction, as this material is eliminated and no longer has potential to be used by terrorists.