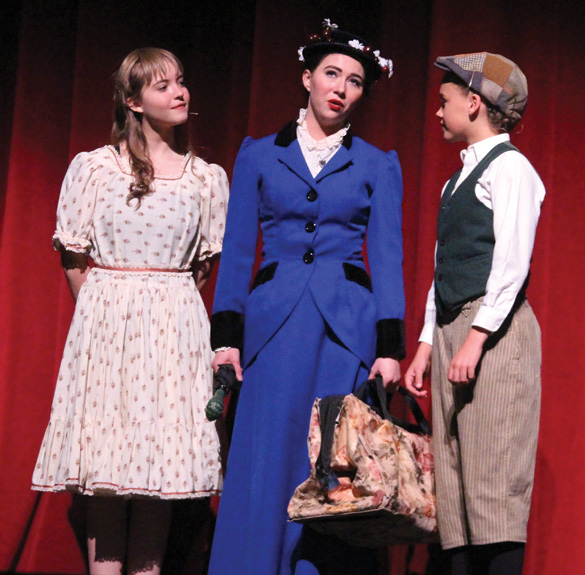 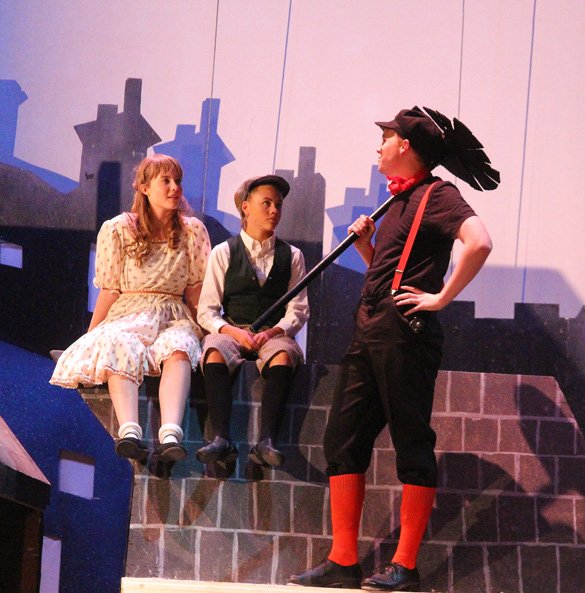 For those in need of a spoonful of sugar, look no further than the Duane Smith Auditorium, for the Los Alamos High School Olion’s production of  “Mary Poppins”.

Magical nanny Mary Poppins (Lauren Partin) transforms the lives of the Banks family in early 20th century London to one of the catchiest soundtracks ever written.

Partin is a wonderful Mary Poppins, with a sweet, yet stern demeanor that’s as Poppins would say, “practically perfect.” Whether she’s vanquishing evil, bidding a wistful goodbye or sailing over the rooftops via her trusty umbrella, Partin is in perfect character. Partin has a lovely voice and her musical numbers shine.

Benjamin Hanlon is charming as Bert, the cockney gentleman who is somewhere between beau and best friend to Mary Poppins. He handles some tricky musical numbers with aplomb and capably captures the spirit of happy-go-lucky Bert.

As the Banks parents, George (Tavo Rogers) and Winifred (Jessica Erkkila) capture their roles well. Rogers manages the difficult role of George without making him too silly. Erkkila has a stunning voice and captured my heart as the bewildered Winifred.

In smaller rolls, Nora Cullinan is terrific as the evil nanny, Miss Andrew. As the servents, Maya Rogers and Trevor Nickless have great comic timing. Sarah Russell is believable and sweet as the Bird Woman.

I love production numbers with crowds of chorus members singing and dancing at once and “Mary Poppins” provides a bunch of fun ones. My favorite is “Step In Time” where a dozen or so chimney sweeps tap dance atop London’s rooftops and Hanlon as Bert dances upside down!

Great special effects — Mary isn’t the only character who takes to the air — and some of the best sets I’ve ever seen in a high school production add hugely to the fun. A giant shout-out goes to the tech crew, the builders and the set design team.

The musicians, under the direction of Zane Meek, sound sprightly and do a great job.

The artistic team of Shay (director/producer), Jason Rutledge (music director) and Patrick MacDonald (choreographer), have led their young cast and crew well in producing a show everyone in Los Alamos should see! Truly, it’s a jolly holiday and you don’t want to miss it!

“Mary Poppins” and five of its actors have been nominated for Popejoy Awards. The competition is 6:30 p.m. Sunday, May 14 in Albuquerque.