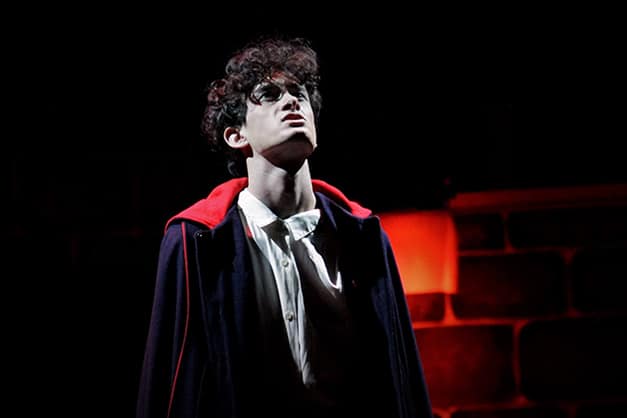 Sam Wolfsberg as Jean Valjean in the Olion’s production of ‘Les Misérables’. Photo By Laura Scott 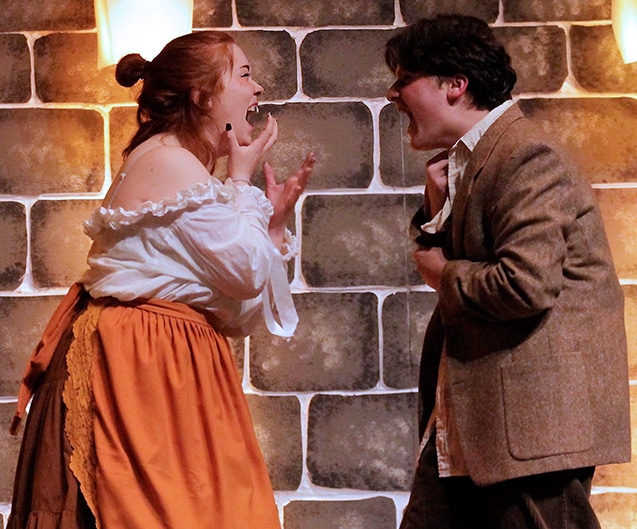 Madame Thénardier (Alma Phillips) and Monsieur Thénardier (Peter Finch) delight in the success of their schemes. Photo By Laura Scott

You definitely do not want to miss Los Alamos High School Olions in their production of “Les Misérables” (School Edition). It doesn’t matter if you’ve read the novel, seen the movie or gone to another production of the musical.

The Olions do a superb job with this production. I have heard there were sound problems on Friday night, but they were mostly cleared up by the Saturday performance.

“Les Misérables” is a sprawling historical novel by Victor Hugo, published in 1862. The novel chronicles the period from 1815 to 1832 and culminates with the June Rebellion, which brought students and working people to the barricades.

The musical version by Claude-Michel Schönberg (music), Alain Boublil and Jean-Marc Natel (original French lyrics), and Herbert Kretzmer (English lyrics) was first performed in Paris in 1980 to acclaim by audiences. Once translated, it took the English-speaking world by storm in 1985. The music is soaring and beautiful. The musical, which is entirely sung, has no spoken dialogue,

“Les Misérables” hinges on the concept of choice. Will the characters choose to look down and see they are “standing in their grave” or will they choose to look up at the stars and live in hope, with courage and with compassion for their fellow men and women?

“Les Misérables centers around Jean Valjean (Sam Wolfsberg), a convict who is paroled after 17 years of hard labor for stealing a loaf of bread to feed a starving child. Jean attempts to put the past behind him, but it keeps catching up with him. After being saved from returning to prison and forgiven by the Bishop for stealing the Church’s silver, the former criminal devotes himself to becoming an honest man, but fate intervenes, and he’s forced to live on the run with his adopted daughter, Cosette (Katie Wingo). He is pursued for many years by the police officer Javert who feels it is his special duty to bring Jean Valjean to justice.

Wolfsberg is absolutely luminous as Jean Valjean. His beautiful voice and strong stage presence allow him to carry the production. I especially loved the mixture of anger and vulnerability Wolfsberg brings to the character. As played by Wolfsberg, Jean Valjean is both proud and humble. Ultimately, he claims his name, and with it, his redemption.

Wolfsberg is not the only actor to bring his role to life. Olivia Long as the doomed Fantine is a standout, as are Wingo as Cosette, Zoe Garcia as Éponine and Marcus Sintay as Javert. They all handle the singing and acting exceptionally well. Elijah Hanks has a terrific voice and makes Marius, Cosette’s love, more than a naïve, love struck fool. I’m sorry he’s graduating since I’d love to see more of him.

Alma Phillips and Peter Finch play the Thénardiers, a couple of unrepentant rogues. They inject a lot of humor and fun into these bad guys, and they mesh beautifully as a couple.

In less central roles, I’d like to call out Brigham Conlin as the Bishop, who brings a fine voice and a lot of feeling to this smallish part. Henry Tholen brings plenty of fire to the role of the leader of the student revolutionaries, Enjolras. Riley Reinheimer is charming as the street urchin Gavroche.

The play is directed by Jason Rutledge in his 10th year with the Olions. Rutledge handles the large cast well. The chorus scenes are well done. He is assisted by stage manager Brooklyn Baca.

I don’t know who designed the versatile set, but it works for every occasion in the musical. The backstage crew keeps the machine well oiled.

In addition to his directing skills, Rutledge also conducts the pocket orchestra. It’s a treat to have such fine live music. It enhances the musical very much.

This is one of the best student musicals I’ve seen from the Olions. You will miss out on a lot if you aren’t in the audience. Luckily, you have four more chances to see “Les Misérables”.

Tickets are on sale here.