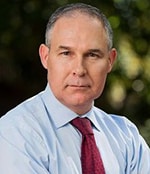 U.S. Sen. Tom Udall: “Scott Pruitt’s tenure at EPA was an utter disgrace. He should have been fired long ago. Pruitt embodies everything about the ‘swamp’ that President Trump claimed he wanted to end – and the fact that Pruitt was kept around this long shows that the president never cared about rooting out corruption or self-dealing in Washington. On the contrary, the Trump administration has made a mockery of public service, and emboldened people like Scott Pruitt who treat their position as a golden ticket for their own personal benefit – at the expense of the health and wellbeing of American families and the long-term health of our environment.

“While Pruitt himself may be gone, his damage will be lasting, and his toxic policies still run the show at the Trump EPA. As they worked to curry favor with political donors and industry, Trump and Pruitt effectively turned the keys over to big polluters to oversee the dismantling of critical protections for our clean air, clean water, and public health. Even today, the president said that he believes Pruitt has done an ‘outstanding job’ – and is handing over the reins to another climate denier in Andrew Wheeler who has spent much of his political career lobbying for the big polluters EPA regulates. The American people’s disgust with Scott Pruitt should serve as blaring red siren for the Trump administration. Americans will not tolerate another EPA administrator whose primary goal is to fight the core mission of the EPA.” Udall led a record number of members of Congress in filing a formal resolution calling for Pruitt’s resignation.

U.S. Sen. Martin Heinrich: “Scott Pruitt has been surrounded by ethical problems and failed to take the core mission of the Environmental Protection Agency seriously. He has been plagued by conflicts of interest and built a long track record that is antithetical to the EPA’s responsibility to keep our nation’s land, air, and water clean. And perhaps most damning of all, Mr. Pruitt has a willful disregard for data-driven science when it comes to tackling climate change. His resignation is long overdue. Americans need a leader at the EPA who is guided in their decisions by the best available science, who will use the EPA to protect our health and well-being, and who will help move New Mexico, and our nation, toward a clean energy economy.”

New Mexico Attorney General Hector Balderas: “This is a resignation that should have happened long ago. Scott Pruitt has shown no regard for the rule of law during his tenure as EPA chief. My office has joined several lawsuits against the EPA since Pruitt took over for failing to protect the best interests of New Mexican schoolchildren and putting industry interests before the health, safety, and welfare of New Mexican families. His tenure has been marred by allegations of corruption and fighting against the core beliefs of the agency that he led, and his resignation is a welcome sight. I encourage President Trump to find leaders who will represent the best interests of the American people, not his own interests or those of private corporations. The American people deserve better than Scott Pruitt.”

Director Kara Cook-Schultz of U.S. PIRG’s toxics program: “Scott Pruitt pledged to ‘restore’ the EPA to its original mission of protecting human health and the environment. He failed, and his many ethical problems shouldn’t obscure that fact. Americans are less safe than they should be today, due to his poor decisions and leadership. We call on the president to clean up the toxic mess he made at the EPA by appointing Scott Pruitt. Republican President Richard Nixon, who created the EPA, understood that we needed to keep our air and water clean, and administrations from both parties have upheld that vision over the ensuing half-century. President Trump needs to nominate someone who will protect human health and the environment so that the EPA can truly succeed in its mission.”

U.S. PIRG is the federation of state Public Interest Research Groups. PIRGs are non-profit, non-partisan public interest advocacy organizations that stand up to powerful interests whenever they threaten our health and safety, our financial security, or our right to fully participate in our democratic society.

Environmental Defense Fund President Fred Krupp: “Scott Pruitt’s reckless tenure at EPA is over, but the damage will be lasting and the threat of additional harm to public health and the environment remains grave. Pruitt left not only a string of failed policies, but an agency still stacked with lobbyists working to protect their former industries rather than American families. It’s time to clean house of the many conflicted political appointees at EPA, and truly drain the swamp of these lobbyists who are polluting our country.

“Pruitt’s unethical behavior and favor-filled relationship with energy lobbyists were well known before his nomination to head EPA. Too many Senators looked the other way when they should have stopped his ill-fated nomination in the first place. The American people will continue to fight President Trump’s attacks on our environment. We now face the stark reality of a coal lobbyist, Andrew Wheeler, running the agency that is supposed to protect our air, water, and climate. We can’t afford more pollution and asthma attacks – our children’s health and their future depends on it. Changing name plates is not enough – we need new, honest leadership that puts the health of American families first.”

Environmental Working Group President Ken Cook: “Scott Pruitt will go down in history as a disgrace to the office of EPA administrator. He will forever be associated with extraordinary ethical corruption and the abuse of power for petty personal enrichments. Sadly, the ideological fervor with which Pruitt pursued the destruction of environmental regulations and the agency itself live on in the Trump administration. So, while Pruitt is gone, and good riddance, our resistance to all he stood for will continue undiminished.”

The Environmental Working Group is a non-profit, non-partisan organization dedicated to protecting human health and the environment’s mission is to empower people to live healthier lives in a healthier environment. With breakthrough research and education, EWG drives consumer choice and civic action.