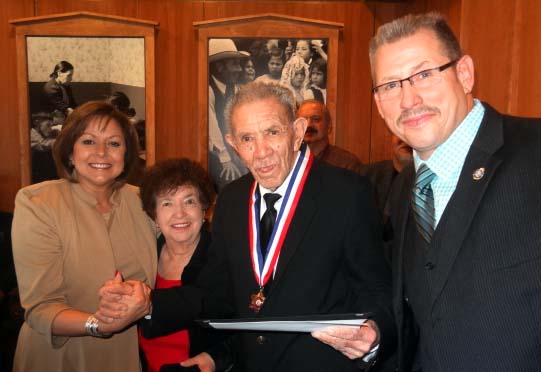 Former Corrections Officer Valentine Martinez, center, was honored Jan 21 and seen here with his wife, Angelina Martinez and far left, Gov. Susana Martinez and NMCD Cabinet Secretary Gregg Marcantel. Courtesy/NMCD
NM Corrections Department News
SANTA FE – Monday Jan. 21, Gov. Susana Martinez and New Mexico Corrections Department Secretary Gregg Marcantel honored the Corrections Officers involved in the 1980 Penitentiary of New Mexico Prison Riot.
“As painful as it is to remember the 1980 riot is a part of this State’s history,” the governor said. “We must remember the sacrifices and hardship endured by these brave men. We wanted to honor these men, but still respect their privacy and the lasting pain the 1980 events have caused them and their families.”

Corrections Officer Lawrence Lucero with Gov. Susana Martinez. Courtesy/NMCD
In a closed ceremony in the Cabinet Room of the Capitol, Governor Martinez and Secretary Marcantel awarded those present with Medals of Honor and Valor for their acts during the Prison riot of Feb. 2 and Feb. 3, 1980.
The posthumous award of the medals was provided to the officers and some families of the deceased on hand. Others who were not able to attend will receive their medals.
“These men are examples for all of us today in the Corrections Department. Their sense of duty remained unwavering in even the most unspeakable moments of their lives and careers,” Marcantel said. “We remember their heroism nearly 33 years ago today, but we also must remember the inmates who lost their lives and remember that while they were prisoners, they were not sentenced to the death they received at the hands of other inmates.”
At least 33 inmates were murdered in the mayhem and 15 corrections officers were held captive during the nearly 36 hours of prisoner control of the facility. During their captivity, several of the officers were subjected to torture and abuse.
The officers honored Jan. 21 were Greg Roybal, Michael Schmitt, Ross Maez ,Valentin Martinez, Larry Mendoza, Edward Ortega Lawrence Lucero, Victor Gallegos, Elton Curry and Antonio Vigil.
The Corrections Department was not able to locate officers Ramon Guiterrez, Jose D. Anaya, Juan Bustos, Mike Hernandez, Ronnie Martinez, Herman Gallegos and Louis CdeBaca.
Menu
LOS ALAMOS