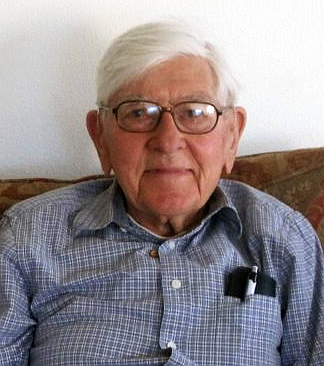 William (Bill) Robert Stratton, 91, of Los Alamos, NM, passed away on Oct. 3, 2013. He is survived by his wife of 61 years, Beverly Stratton, three daughters, Nancy Stratton (Gary Echert), Gail Stratton (Pat Miller), Sheila Capute (Dave Capute), a nephew who was like a son, Fred Lundquist, and five grandsons, Joshua & Brendan Capute, William Miller, and Matthew & Michael Echert. He was a loving husband, father and friend of many and known for his sharp intellect & wide-ranging interests as well as his kindness.

Bill was born in River Falls, Wisconsin on May 15, 1922. He served as a Naval Aviator during WWII. He received his Ph.D. in Physics in 1951 from the University of Minnesota where he also met Beverly. He worked and lived in Los Alamos for the next 61 years. He was initially employed at LANL and worked there for many years. When he retired from LANL he started his own consulting business that focused on nuclear energy and safety. Later, he was very active in the Los Alamos Education Group and worked to educate the public about nuclear energy. He had an exemplary work ethic and a very strong sense of responsibility to his community and society.

He and his wife raised their daughters with a love of reading, skiing, horseback riding, gardening, photography and traveling. He stressed the importance of kindness to all, including animals.

He and Beverly traveled extensively all over the world. For many years, they also travelled, skied, hiked and boated with a group of dear friends that came to be known as the “hiking group.”

Bill was an avid reader of history and current events. He was never afraid to take on something new. He never stopped being involved in life and with people and was known for his kindness and encouragement even in his last months. His was a life well lived. He was well loved and loved well in return. He will be terribly missed.

A memorial and celebration of his life will be held in Los Alamos at a later date. In lieu of flowers, contributions can be made to Doctors Without Borders, Nature Conservancy or the Smile Train.