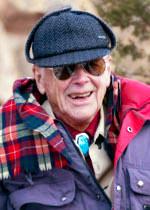 WILLIAM STANLEY HALL Nov. 18, 1924 – Jan. 9, 2019
William Stanley Hall died Jan. 9, 2019. He was born Nov. 18, 1924 in Manhattan, New York City.
On the cold, November day when Stanley was born, his father, William Swanson Hall, of Manhattan was officiating at a Masonic meeting, so his mother, Elsa Elvira Kellberg, called for a taxi. About half way to the hospital on Broadway, the driver stopped and climbed into the cab to get warm before proceeding. In that day and time, the driver was outside as if one were driving a team of horses.
The doctor was then called from the Masonic meeting. Stanley had no brothers or sisters. His parents decided to stop while they were ahead. In August 1934, his mother married Henry W. Sander, who had a very loving relationship with Stanley. Henry was raised in Frankfurt am Main in Germany and came to the USA in 1928.
Stanley eventually moved to Lawrenceville, NJ and attended Princeton High School. At graduation in 1942, he received recognition for being outstanding in science. He then joined on the Manhattan Project at Princeton University.
That Princeton Group came to Los Alamos in March 1943 after first getting the mothballed Harvard Cyclotron running, then disassembling, and shipping it to Los Alamos. That group was among the first 100 workers at Los Alamos. After more than a year of such work, Stanley was drafted. He went to Fort Bliss for induction on a weekend and moved from a dormitory to the barracks without missing a day of work.
During the Army time, he worked a few months at the Trinity Test site and was 10 miles away when the test bomb went off. After a year, a month, and 25 days, he was discharged because there was a job waiting for him in civilian life that was vital to the national welfare, which was the same job. After a few more months, he started at Harvard getting his degree in three years.
He then returned to the cyclotron group for more than 20 years and switched to the Computing Division mainly to work without radiation.
He enjoyed fishing, hunting, target shooting, playing the trombone, bass violin and skiing and once took part in a stock car race starting from the skating rink and ending up the hill about a mile away driving the family Nash sedan. He wasn’t first, but he wasn’t last either.
His very first vote in Cambridge, MA was for Tom Dewey and he never missed an election after that.
Stanley is survived by a daughter, Yvette (Kelly) McFarland, of Tucumcari, NM, a grandson, Keldon McFarland of Silver Spring, MD, a granddaughter, Suzette (Ryan) Penfold of Albuquerque, a son, Harold Stanley Hall (Gayle), of Sioux Falls, SD. He is also survived by a loving wife, Georgia Anne, of Los Alamos, her son, Paul Clark, granddaughter, Phaedra (Peter) Roybal and grandson, Eli, all of Santa Fe.
Stanley was preceded in death by Georgia’s son, Glenn Clark.
Cremation has already taken place.
Menu
Los Alamos
84°
Sunny
5:49am8:25pm MDT
Feels like: 84°F
Wind: 6mph E
Humidity: 12%
Pressure: 29.76"Hg
UV index: 10
ThuFriSat
82/61°F
82/59°F
77/57°F
Weather forecast Los Alamos, New Mexico ▸