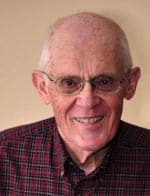 Bill is survived by his wife Carol Wageman of Albuquerque, son Steve Wageman (Shelly) of Rio Rancho, daughter Leslie Linke of Los Alamos, and five grandchildren (Nick, Kevin, and David Linke; Danny and Yvonne [Missy] Wageman). He was preceded in death by both of his parents and his eldest son, Stuart Wageman. Bill married his wife, Carol, on September 5, 1954, and they were married for over 63 years.

Bill grew up as an only child in Mead, a very small community in eastern Nebraska. Raised during the Great Depression in very humble circumstances, Bill always worked hard and excelled in school. He eventually earned a Master’s of Science degree in math and physics from the University of Nebraska, and began to work as a summer student intern in 1954 at what was then the Los Alamos Scientific Laboratory. Bill participated in the development of several technologies during his tenure at the Laboratory and supported his group with mainframe computer management. He retired as a Technical Staff Member at the Laboratory after 38 years of distinguished service.

Bill was a passionate and active amateur radio operator, and even met his future wife on the radio. He earned his first amateur radio operator’s license around 1950, and was assigned the call sign of W0BUR. He went on to become one of the very first individuals in the United States to earn the coveted Amateur Extra Class license. Bill was known around the world as K5MAT for many years, as he was very successful in radio contests and even published several articles in “QST,” the monthly magazine for the American Radio Relay League. For a while, Bill held the shortest amateur call sign in North America, N5EE. All three of Bill’s children, his daughter-in-law, and one of his grandchildren became amateur radio operators through his encouragement.

Bill and Carol lived life to the fullest following his retirement. Together they toured all over the world and visited many countries, and ultimately visited every continent. He also volunteered for many years as an usher at Popejoy Hall in Albuquerque and provided support to his church in several capacities. Bill led an extraordinary life, and left behind a wonderful legacy of intelligence, humor, kindness, generosity, and community service.

A memorial service will take place on July 27, 2018, which would have been Bill’s 86th birthday. Details for his service will be announced on the French Mortuary website.