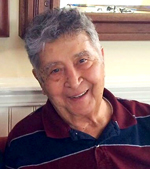 A 1953 graduate of Espanola High School, he later served in the US Army for three years where he was honorably discharged and returned home to a 35-year career at Los Alamos National Laboratory. In 1960, he married Cleo Herrera of El Rancho and together, they raised five children.

Beyond his love of God and for his family, Wilfred’s passions were his apple orchard and working tirelessly to protect the acequias and water rights of the communities at large. He was well known for his visionary leadership and his ability to deliver on those innovative ideas with impeccable principles, integrity and a sense of humor. Among his many accomplishments, he founded the Acequias Del Norte organization to highlight the needs of acequia owners and to give them a voice in state policy. He also served as the chair of the New Mexico Acequia Commission, which was formed by then Governor Gary Carruthers to help owners understand their rights and laws affecting the acequias.

In the 1970’s, he led the surrounding communities in a victory that prevented the federal government from developing the El Llano Canal, which ultimately preserved water rights for the individual land owners. Later in his role as Chairman of the Las Nueve Acequias Steering Committee, he worked closely with U.S. Senator Pete V. Domenici and other congressional leaders to secure more than $30 million of federal funding to improve and preserve nine acequias in Velarde and surrounding communities.

He is survived by the love of his life Cleo, his children, Joe, Lisa, Lawrence and wife Anna, Carmella and Ron. He is also survived by his grandchildren, Nikkileigh, Lance, Tyler, Anthony, Santana, Diego, Mateo and Mossimo.

Public visitation was Wednesday, March 15, 2017 at 6:00 p.m. in the Sangre de Cristo Chapel of DeVargas Funeral Home & Crematory with a rosary to be recited at 7:00 p.m. Mass of Christian burial is to be celebrated on Thursday, March 16, 2017 at 11:30 a.m. at the Holy Cross Catholic Church in Santa Cruz by Bishop Arthur N. Tafoya. Burial will be held on Tuesday, March 21, 2017 at 10:30 a.m. at the Santa Fe National Cemetery, with the following serving as pallbearers: Max Cordova, Jake Fresquez, Charlie Gasca, Kurt Moore, Tony Ortiz and Elmer Salazar. Honorary pallbearers will be his grandchildren named above.

The Fisher House, serving military families, holds a special place in the hearts of our family. For those who wish to make a donation in Wilfred’s name, please visit FisherHouse.org. Wilfred’s family has entrusted his care to the DeVargas Funeral Home & Crematory of the Espanola Valley. www.devargasfuneral.com, 505.747.7477.