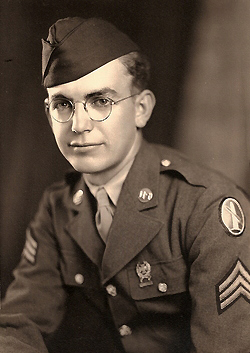 Walt met his wife, Mary Louise Hoefer when they were juniors in high school in Salina, Kansas. Their first date was a movie, and they were together for over 70 years. Walt and Mary were married December 4, 1942 in Washington D.C., where Walt was stationed in the Army. They raised six children, had ten grandchildren and twelve great-grandchildren.

Upon testing, Walt was sent by the Army to the Massachusetts Institute of Technology, where he majored in chemical engineering. He joined the Army’s Manhattan District in Los Alamos in 1944 and contributed his technical talents in the development, loading and assembly of the nuclear weapons used at the Trinity site and on Nagasaki, Japan.

In a letter dated October 1, 1945, J. Robert Oppenheimer, director for The Manhattan Project, wrote these words to Walt:

“You are to be especially commended for the excellence of your work and for the qualities of leadership which you have shown throughout your work with the project during the last eighteen months. In the days when we were skeptical about the likelihood of success of the first atomic bomb trial, you helped develop methods of recovery and chemical separation, which were intended to save the invaluable active material should the bomb fail. It took strength of character to work hard and cheerfully as you did when asked to work on the methods to be used in case of failure rather than on the methods with which to achieve success. In the last two months before Trinity, you worked on problems associated with explosives. Military security prevents our describing the details of that work, except to say that your individual contribution was significant in achieving the success of our program at Trinity and Nagasaki. You more than anyone else helped to organize the production of this one component of the bomb.”

Walt was also involved in the invention of the exploding bridge-wire detonator. He established quality, surveillance, and training programs for military crews to handle, inspect and install detonators and weapons. He was involved in the development of the “slapper” version of the exploding bridge-wire detonator. In his position as associate group leader for advanced development in the detonator systems group at Los Alamos National Laboratory, he emphasized application of technology toward conventional military weapons.

As a member of the pyrotechnics and explosive applications section steering committee, and in his work with the American Defense Preparedness Association, he was instrumental in encouraging information exchanges between the British nuclear laboratory, Lawrence Livermore, Sandia, China Lake, the Naval Lab in Washington D.C., and Eglin Air Force Base. He hosted several technical meetings, and arranged a number of papers from the nuclear community in efforts to share national laboratory technology to foster advances of the U.S. Military forces field explosive devices.

Walt was also sent to Operation Greenhouse at the Eniwetok Atoll where he witnessed several nuclear tests. Walt rode in a plane designated as a ‘sample plane’ (after each test, fighter planes equipped with filters would fly through the debris cloud to collect samples which were sent back to Los Alamos as soon as possible).

Walt worked for the Los Alamos National Laboratory for over 40 years, officially retiring in 1988, but unofficially involved in a consulting capacity for fifteen years following. Walt said that he “was blessed to have a job he liked until the day he retired, and that his work in Los Alamos had him on cutting edge of technology, trying to do what had not been done before.”

Walt had a love of gardening, and his children and grandchildren have fond memories of eating right out of the garden. An avid camper and lover of nature, Walt organized regular ventures to Vallecito Lake in the San Juan Range of Colorado. Through the years he was an active member of the United Church in Los Alamos, White Rock Presbyterian, Bryce Ave. Presbyterian in White Rock, Forest Gate Presbyterian in Colorado Springs, CO, and Providence Presbyterian in Albuquerque. He served as an Elder in the Presbyterian churches. When asked what advice about life he would like to leave his family members, he said, “Realize your need for God’s work in your life. He will help you if you ask. He does not always answer the way we would like and accepting that is an important factor – – accept it when it comes out that way.”

A Memorial Service honoring the life of Walt Meyers will be held at 11:00 am, December 28, 2013 at Bryce Avenue Presbyterian Church, (White Rock), 333 Bryce Avenue, Los Alamos, NM 87544. There will be a light lunch reception at the church following the service. All are welcome. In lieu of flowers, the family asks that donations be made to The Los Alamos Historical Society at historicalsociety@losalamoshistory.com, PO Box 43, Los Alamos, NM 87544.