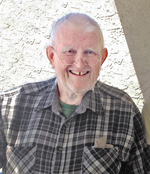 THOMAS J. MERSON April 15, 2015
Thomas J. Merson (Tom) passed away on April 15, 2015 following a stroke at age 79 while vacationing at a beach in Southern California. His picture was taken by his brother on April 12, 2015.
Tom was born in Chico, CA to Thomas B. and Dorothy M. Merson in 1935. He is survived by his wife of 54 years, Jean L. Merson, his daughter, Linda J. Calkins and husband, Dan M. Calkins of Farmington, NM, his son, John A. Merson and wife, Sheila Merson of Albuquerque, NM, and grandchhildren, Kathryn J. Merson, Thomas J. Merson and Cody R. Calkins, and his siblings, Richard Larry Merson and wife Teri Wolcott of Davis, CA, Robert W. Merson and wife Julia of Lindreth, NM, James L. Merson of Palm Desert, CA and Elizabeth L. Merson of Salinas, CA and numerous nieces and nephews.
Tom attended Bakersfield College in Bakersfield, CA then transferred to the University of California, Berkeley where he earned a BS in Engineering Physics. In 1957 he accepted a position at ACF Industries in Albuquerque and worked there until 1963 when he accepted a position working on the same project at Los Alamos Scientific Laboratory.
He completed an MS degree in Mechanical Engineering at the University of New Mexico Graduate Center for which he had started work while in Albuquerque. At the Laboratory (LASL and LANL) he worked in N Division, Engineering Division and WX Division. Two major long term projects he worked on were Rover and Yucca Mountain, as well as several others throughout his career. He retired in 1991.
In 1960 Tom married his wife Jean. They had met while both were students at Berkeley.
Outside of work, Tom enjoyed many activities. He was an avid hunter of elk, deer, antelope, jack rabbits, quail, dove, and he bagged an oryx at White Sands. He loved the woods and mountains. He hiked and camped and was a rock hound. He liked to travel. He enjoyed gathering and cutting (and burning) fire wood, and gardening.
Tom was a scoutmaster and a Little League Coach. He attended track and cross country meets and many rodeos and gymkhanas and queen’s court events and provided transportation support to the girls and their horses. He served on the Los Alamos Credit Union Advisory Committee and Board of Directors as a volunteer. He drove patients to medical appointments for HELP, and was a member of the Los Alamos Sportsmen’s Club and the Los Alamos Geological Society where he held offices in both.
Tom lived his life to the fullest and was able to do most of his “bucket list” items. He was a good husband and son and father and brother and grandfather and neighbor and friend. He was a good man and will be missed by many.
A celebration of his life will be held in early June. The family requests that in lieu of flowers a donation be made to the University of New Mexico Foundation or a charity of your choice.
Menu
Los Alamos
45°
Fair
7:10am5:25pm MST
Feels like: 37°F
Wind: 13mph S
Humidity: 24%
Pressure: 29.91"Hg
UV index: 2
WedThuFri
36/18°F
34/16°F
37/21°F
Weather forecast Los Alamos, New Mexico ▸