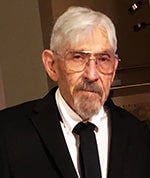 Terry Dewayne Langham was born on September 20, 1937 in Frederick, Oklahoma to Lela Mary and Marvin Wesley Langham. On June 7, 2018, he passed away peacefully at his Los Alamos home into the arms of his savior with his wife, Clarice, by his side. Terry was 80-years-old.

As a child, Terry spent time in Frederick, Oklahoma, Oklahoma City, Oklahoma, and Brownwood, Texas. In 1949, at the age of twelve, he moved with his parents and little brother, Taylor, to Los Alamos, New Mexico when it was still a closed city. From that time on, Terry made Los Alamos his home.

He was a 1955 graduate of Los Alamos High School, and while in high school, fell in love with drama and took great joy in acting. Terry married Marjorie Mae Thompson in Los Alamos, and they had two sons, Sean Robert Langham and Ian Douglas Langham.

Terry was first employed by Zia Corporation and then moved to the Los Alamos National Laboratory, from which he retired after 36 years. He served in many capacities throughout his career at the Lab and enjoyed it greatly.

Terry was a very active member of The United Church of Los Alamos for over 40 years. He took great joy in participating and supporting their youth program and their yearly youth mission trips to build homes for those in great need in Mexico for many years. Terry was also a talented puppeteer and served on the church’s Marionette team and puppet ministry.

Throughout his life, Terry was very involved in the Los Alamos community. He was a Mason and active board member for the Los Alamos Parks and Recreation Board. He could be seen officiating various runs and walks throughout Los Alamos, as well as other volunteer activities.

Terry loved to act and sing. For much of his life, Terry was a frequent participant of many choral performances and play productions at the Los Alamos Performing Arts Center. He was a member of the Barbershop Harmony Society and was very active in the Los Alamos Chorale Society, the “Lads of Enchantment” Barbershop Quartet, and The Los Alamos New Mexico Barbershop Chorus. Terry had a true desire to “Keep The Whole World Singing.”

Terry was very creative and enjoyed many hobbies; such as drawing, flying, jewelry making, motorcycle riding, puppet making, and sailing. He especially enjoyed many sailing hours on Lake Heron in his beloved 23-foot cabin sailboat, Gatita.

On January 26, 2017, Terry married his love of over 40 years, Clarice Cox. They spent their remaining time taking daily walks around Ashley Pond, visiting with their friends at the Los Alamos Senior Center and at Starbucks, and just enjoying time together. Throughout Terry’s final days, he and Clarice spent their time holding hands, telling their love for each other, and singing their favorite songs.

Terry was preceded in death by his father, Marvin Langham, his mother, Lela Langham, and his stepmother, Maureen Langham. He is survived by his wife, Clarice Cox, his brother, Paschal Taylor Langham and wife, Christa, of Offenbach, Germany, his stepbrother, Ben Pilcher, and wife, Melissa, of Georgetown, Texas, his stepsister, Jeanette Praetorius, and husband, Walt, of Littleton, Colorado, his son, Sean Robert Langham, wife, Gina, and granddaughter, Victoria, of Providence Village, Texas, his son, Ian Douglas Langham, wife, Melissa and step granddaughter Sequoia, of Las Animas, Colorado, stepson Charley Cox, and his wife, Anna, their children Brian, and Maya, of Berkley, California, and stepson, Ed Cox, and his wife, Phyllis, of Sacramento, California.

Terry was a Godly man, devoted husband, great father and father-in-law, and one-of-a-kind friend. He loved people and made friends wherever he went. He also loved New Mexico and its people all the days of his life. Terry will be truly missed.