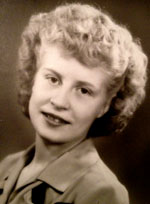 Signe “June” Babich passed quietly in her sleep on August 24, 2016 surrounded by her family.

Born on June 8, 1930 in Superior, Wyoming to Signe Bertina Carlson and Carl A. Anderson, Signe “June” was destined to become a motherly figure.  Being one of nine mouths to feed during the Great Depression and WWII, June knew that the love she was shown from her mother was exactly what she would portray in her own sibling interactions.  June knew that although her life was not filled with wealth and gold, it was filled with much more – family.

June met Frank Babich, a local coal miner and WWII veteran, and knew that he was the one for her.  By 1950, the two had married and begun a life together in the coal mining town.  Her own family was beginning to grow as they welcomed their first child, Marilynn June, in 1950.  As the years past, Frank and June had soaked up the joy of parenting but knew their family was not complete without one more addition.  James Martin, born in 1952, was the missing piece.

Although their family was now complete, a new adventure was yet ahead of them. Frank pursued a job offered at LANL in Los Alamos, NM. June would soon join him and leave the coal mining town behind. Both Frank and June would fall in love with the small town of Los Alamos and set their roots to flourish.  June would join LANL in the early 1960s. Employed as a clerk-typist, June was quickly recognized for her hard work and dedication. It didn’t take long before she was promoted. By the late 1980s, she had to medically retire as a Shipping-Receiving Specialist/Supervisor at SM-30. June was sorely missed but had greater grandchildren adventures to look forward to.

While work brought June joy, family brought her satisfaction and indescribable bliss. By the time June retired, she had been blessed with four grandchildren; Pearl Lynette & Cynthia Jean and Crystal Denise & Tiffany Rose.  June often said she never knew she could love anyone as much as she loved her granddaughters and took every opportunity to dote on them.  She was warm, kind and gentle.  June loved to see her grandchildren smile and hear them laugh, always had a hug and encouraging word ready and kept them safe from harm.

June was further blessed to meet and spoil all of her great-grandchildren; Christian, Jason, Rachel, Aubrey, James, Diego and Daniela. She was as enamored and doting with them as she had been with her granddaughters. She loved to cuddle and play and had found pleasure in telling stories about the funny little things they each did and said.

June was known by all for her generosity, compassion and love of all children. Everyone that met her called her Grandma or Baba, even though they were not part of the family. She was an amazing cook and baker; her specialties were spaghetti, traditional Croatian dishes, homemade bread, doughnuts and strudel.

June was a faithful Catholic and said prayers every night for each family member and friend. She was truly an angel sent here to Earth, and although she was called away, we know she is happy to be joined, once again, with her husband Frank and that they are both watching over us.

On behalf of all those that have met her, this description of June and her life could never do justice to a woman that great.  We are honored and privileged to have known and been loved by such an amazing and awesome mother, grandmother, great-grandmother, sister, aunt and friend. Her love has inspired us and makes us aspire to be more like our “Baba”Signe June Babich.

A rosary will be held Oct. 15 at 9:00 am in White Rock St. Joseph Mission. Thank you Dan and Jessie Valdez for your Faith and Prayers and fellowship. A private grave side service will be announced to family and friends upon completion of the headstone. Charitable donations preferred to be made in place of flowers.

A Note From a Privileged Son

As my Uncle Oscar said it would take a book rather than a short obituary to describe all the good that Mom did for everyone she knew. She never learned how to say no to someone who needed help, even though the person in need got in that position through his/her own carelessness or bad decisions. I her son benefited the most from her largesse.

In 1964, at age 11½, I had large amounts of testosterone making me stupid. While my father was on travel to NTS I attended a charity event at our Parish. During the event, for reasons I don’t remember, I was involved in a fist fight. My exit was unceremoniously painful to my ear. I remember the Nun saying something about respect as the door to the Parish Hall closed. I waited around by the High School until the event was over and went home with everyone else. The walk, to 36th Street, seemed longer than usual. I went straight to my room knowing a storm was brewing. I heard my sister come in and say “hi” to mom who was doing something in the kitchen as usual. She asked my sister if there was any excitement and was met with the tale of two ruffians being ejected for fist fighting. “Did Jim tell you he was one of them”? The air in the house was sucked into my lungs. I held my breath and listened to the rear screen door open and smack shut. I was confused by the calm.

My mother had hip troubles from birth and the effect at this point was a pronounced limp that was easily distinguishable. What I heard from bottom floor was the angry walk of a peg legged Pirate coming my way. Soft then hard like a hammer hitting the floor. Long John Silver was coming for a reckoning.

A peg leg came down the hall, at my open door I expected to see Long John. What I got was My Mother wearing Long Johns face and carrying Dad’s outside broom. She had been using it as a staff on her staircase assent. At this point I must say that the testosterone had also made me grow. I was as tall as my Mom and had 20 lbs on her. I would also like to point out that the broom she chose was not her kitchen broom but Dad’s, outside broom.  t had a 6ft handle that you could use and a closet pole and 18in. of bristles.

She said three words.”Is It True”? My face told her the answer and the swing was as good as any hockey player. It caught me square on the right rump. The second blow caught me square in the back side jarring my teeth and flaring my stupid side to react. I grabbed the broom and said, “I don’t have to let you do this”! She said “Me, or Dad when he gets back”! The broom was suddenly very hot, white hot, I let it go and spun to try and evade the next one coming. I twirled and squatted to show my agility and was faced with the fact that my Mother had switched hands and was now swinging south paw.

I had managed to turn her short swatting swing into a home run by using my arm to block the broom over my head, almost. It was the block being slow, and the squat embarrassing, as the full force of the working end of the broom caught me flush in the mug, forehead to chin. I was unceremoniously sat sprawling on my bed a trickle of blood from my nose.

My mother stood as Warrior in front of me. Broom in hand she must have thought she had my attention. It was then that I got the full Fury of a Mother Disgraced. She spoke to me through her teeth and from her heart.  Coldly reminding me what I had been taught over and over, Respect and Trust. I would have taken the broom harder and longer not to see her hurt and disapproval. She never cried, she never screamed. As she left my bedroom, me still sitting on the bed, she softened for an instant asking, “Where is your honor”? It was time to grow up and it was Mom who drove, swung, home the truth of it.

The only thing my father had to say on his return was “the front walk needs sweeping. You can use my broom, the one with the blood on it”. It was also my lesson in equality between the sexes. I began to see that Dad wore the pants that Mom picked out, pressed, and controlled the wallet he pocketed.

Mom was so like the neighborhood on 36th. We had Nother Mothers everywhere, strong role models in abundance. Mom would thank all of them. The Horton’s Glen (deceased) and Eileen (living) of Carnation WA., saved my father’s life when a milk glass bowl exploded nearly amputating his right hand. Old Dr. Dotson operated 9 hours reconstructing arteries, tendons, and muscle. How do thank Genius for his 95% recovery?  Thank you friends for saving Dad’s life,  his carreer, and our families way of life? Thank you Friends like Charles (deceased) and Claudette Thiebolt (living) Albuquerque, for lifelong aid, support, and sacrifice, for love. Thank you to all the Nother Mothers like Jessie Valdez, Mrs. Rutherford, Mrs. Larson, Mrs. Delano, Mrs. O’Rourke, and their strong husbands, all of whom enjoyed blocks parties, evening football games, hide and seek, and had kids, not their own, underfoot in every kitchen on the block.

Thank you Dr. Carolyn Linnebur “Medicine Woman” for being a throwback to Physicians as Friends. Quality care and character from all associates especially “Nightingale” Beth Harrison.

Thank you Lindsey Baca for the giving of and teaching dignity for life and respect of death.

My honor is that of a thankful and privileged Son to have been raised here in Los Alamos and for a Mom who stood as an example of the word. She was a warrior’s woman who possessed strength, pride, compassion, Hope, and LOVE. I have tried to be as good a man as my Father. I can only Hope to be ½ as good as the woman my Mother was.