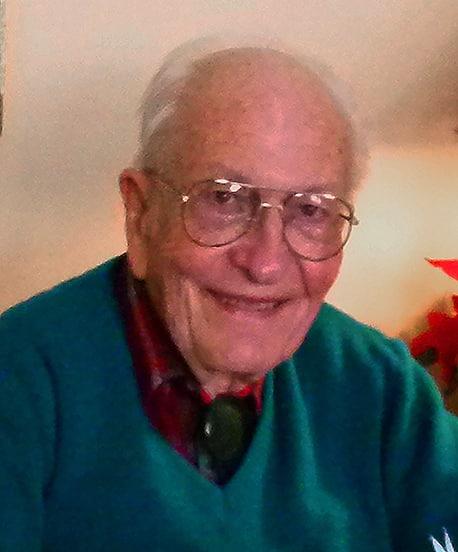 ROBERT LEE NANCE March 10, 1928 – Oct. 17, 2018
Bob Nance (March 10, 1928 – October 17, 2018) “was a great man with a kind soul who could out hike anyone half his age and was a wonderful story teller,” wrote a great nephew at the time his peaceful passing. Robert/ Bob was a true gentleman and highly generous with his love, time and resources.
Robert’s loving parents and brother, Arnold (6 years younger), lived on “Moonshine Hill,” Inspiration, Arizona. Their home looked down on the huge copper mine and smelter where his dad worked. His father, Francis Nance, lost his job during the depression so the family moved to Bob’s Grandfather’s high altitude mining cabins (circa 1912) where Francis became a hard rock miner through Grub Stake support. Gold was not plentiful but the family grew closer and their hearts remained at the cabins. Bob happily spent every summer there until health decline in his mid-80s. He was at his best at “GOLD CREEK” and shared it generously with many.
Bob’s family post-depression home was once again on the hill above the copper mine until he earned a bachelors in CHEMISTRY from Arizona State. Hired by the Los Alamos Lab in 1951, this “mountain man” felt at home. The United Church of Los Alamos became his faith family and he married lively young member Emily Rosenquest. They lovingly raised 2 children, Betty Nance Smith and Robert A Nance, whom he encouraged to follow their dreams. With early retirement Bob and his handicapped Emily traveled extensively, always making sure she was a full participant. Their condo in Kona, Hawaii was a favorite, along with cruises.
Through all the ups and downs of life he loved his family deeply. “Bopbop”, as he was called, adored and was very proud of his granddaughters, Sheriden and Sonja (married to Sam Elson). Bob’s gentle persistent humor and caring ways charmed many a friend. He loved pretending to be a “curmudgeon” and also created funny nicknames for those he cherished. Small dogs that could hike were definitely this man’s best friend. Bob conquered high mountain ridges yearly until his early 80’s. When living at beloved Aspen Ridge he headed out with his trusty “walker” and told all, “I need to do more walking.”
Bob’s fulfilling career began at the Plutonium DP Site (1951) and ended at TA-55, retiring at age 60. He gained a reputation for wisdom and practical knowledge concerning Nuclear Chemistry processes as he developed and implemented a number of plutonium chemical separation and purification flowsheets. Of great significance was the challenging recovery of all the plutonium residues from the fatal DP Site criticality accident of Cecil Kelly and the high radiation exposure of Rod Day on December 30, 1958. Bob accomplished that unprecedented task by tackling small volumes of the organic solution at a time, by forcing the organic absorbent to release its Plutonium content into an aqueous phase and then precipitating the Plutonium as the oxalate.
Bob was also responsible for the startup of some new gloveboxes used for the recovery of Americium from some aged Plutonium metal radiation sources. His knowledge and experience were great assets to the laboratory. Known as a gentleman and excellent chemist, Bob mentored a number of scientists who went on to have distinguished careers at the laboratory.
Bob is preceded in death by his wife, Emily R Nance, parents, Emily A and Francis Nance, his brother Arnold, and his first cousins, Dean Hauser and Jeanne Bates. He is survived by his son, Robert A Nance and wife Paula, daughter, Betty Nance Smith and husband Roger Smith, granddaughters, Sheriden Smith and Sonja (Smith) Elson plus husband Sam Elson. Bob also is survived by numerous cabin-going cousins who grew up loving this kind, gentle, generous super-hiker.
He will be missed by local Viola’s restaurant where he ate weekly for many, many years. Three days before he passed he downed 2/3s of a huge breakfast burrito his family and friends brought him.
“Saints are people who make the living Christ visible to us in a special way.” Henri Nouwen Bob Nance showed God’s love to others by quietly giving all he could to anyone in need, not just his family and friends.
In his memory people may donate directly to his beloved United Church Memorial Fund, 2525 Canyon Rd, Los Alamos, to aid the needy OR the Saint Bonaventure Indian School and Mission, which strives to give impoverished Navajo families in Thoreau, NM schooling and the things we take for granted, like heat (from a decent wood stove) and clean water (now brought by a truck). Address: PO Box 610, Thoreau, NM 87323-0610, Website: STBONAVENTUREMISSION.ORG
ALL are invited to celebrate Bob Nance’s life at his Memorial service NOVEMBER 10th at 3 PM, at the UNITED CHURCH OF LOS ALAMOS, 2525 Canyon Road, Los Alamos, NM.
Please share your stories and condolences on Robert´s memorial webpage at: www.riverfamilyfuneralhome.com
The family of Robert Nance has entrusted his care to Rivera Family Funerals & Cremations of Los Alamos, 1627 A Central Ave, Los Alamos, NM 87544 (505) 663-6880.
Menu
Los Alamos
73°
Fair
5:49am8:25pm MDT
Feels like: 73°F
Wind: 6mph NNW
Humidity: 17%
Pressure: 30.13"Hg
UV index: 0
MonTueWed
84/57°F
88/66°F
88/64°F
Weather forecast Los Alamos, New Mexico ▸