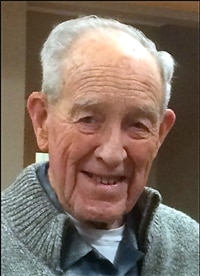 He grew up in Athol, MA, and worked odd jobs as a kid and at Union Twist Drill after school. He was a known member of the Silver Lake Street Gang and was not part of any shenanigans in town.

After the war, Bob went back and forth between California and Massachusetts working different jobs. His passion was working on airplanes, which he was able to do for Northrup, Hughes Aircraft, United, and Westover and Edwards Air Force Bases.

During one of those stints in Massachusetts in 1949, he met Constance L’Ecuyer. She was reluctant to go out with Bob at first, but luckily for their future kids, she finally relented. They were married on April 19, 1952, in Athol.

Bob worked at the Los Alamos National Lab and earned his Bachelor of Electrical Engineering from the University of New Mexico in 1968. He worked at the Meson Physics Facility (LANSC) for many years until his retirement in 1990.

Bob and the rest of the Newells were fortunate to have extended family, the Gillis clan, in Los Alamos. Together they enjoyed frequent camping, hunting, horseback riding, four-wheel driving, and backpacking trips together. The two ‘Uncle Bobs’ were like brothers.

Bob was an avid bullseye pistol marksman all his life, traveling around the country for matches. He was instrumental in building the pistol range in Rendija Canyon and later became its chairman. He was also very capable of building anything, from houses and car engines to precise and beautiful pistol grips that he sold around the world.

Bob and Connie were able to travel frequently during retirement and spend time with their kids and grandkids. They were blessed with 14 grandchildren and seven great grandchildren.

Connie passed away in Los Alamos five months ago, and it was too much for Bob to be without his love of 70 years. He passed away peacefully May 13, 2022.

Services for Bob will be held at 10 a.m., Saturday June 11, 2022 at the Immaculate Heart of Mary Catholic Church in Los Alamos with reception following.