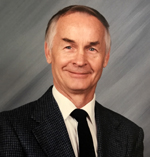 In loving memory of Raymond Pederson, husband, father, grandfather, and friend. Ray was the son of Peder and Louise Pederson. He moved with his wife, Lisely, from North Dakota to New Mexico in 1954 where he worked for the Los Alamos National Labs. Here his natural inquisitiveness and hard work lead him to give his expertise in varied fields from critical assembly operation, mechanical design, computer programming, and many more areas.

Ray was a kind and gentle man who could fix almost any mechanical thing and would drop everything to help others. He had his way of doing things and never expected more from anyone than what he expected from himself. His odd sense of humor was appreciated and at times would get him in trouble.

Ray is now with his Lord and Savior Jesus. He is met in heaven by his loving wife, Lisely Knutson Pederson, his brothers and sisters; Wilfred, Palmer, Herbert, Peder, Oviala, Gladys and Marlene Gault.