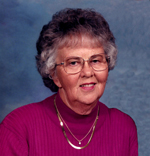 Nona Brandt, beloved wife of Daniel “Danny” Brandt, and mother of Dennis Lee Brandt and Kenneth Alan “Ken” Brandt, died peacefully at home at the age of 89 on October 4, 2016.

Born Evelyn Nona Brandt to Ida Mae Fleming Kimbrel and John Walter Kimbrel on January 25, 1927 in Derby, Colorado, Nona lived in Colorado until she and Danny came to Los Alamos in 1951. Nona, who met Danny at a roller-skating rink in Derby, married Danny on April 26, 1947.

Nona and Danny, along with their sons and daughters-in-law, celebrated 60 years of marriage in 2007 with a trip to Kauai. They celebrated their 69th anniversary with one of Nona’s favorite meals, an enchilada dinner, on April 26, 2016.

Nona was a talented seamstress who sewed everything from curtains to appliqued jackets. She also worked at the Clothes Rack in downtown Los Alamos for several years.

After raising her family, Nona enjoyed more than 36 years of travel with Danny. She loved gardening, hiking, cross country skiing, and bowling. Sadly, her participation in these activities was cut short when she suffered a stroke on July 4, 2007.

For many years Nona was a member of a women’s hiking group.  A highlight of her life was when she traveled with friends to hike in the Black Forest in Germany.

Nona and Danny set out on numerous road trips throughout the United States and British Columbia. Nona loved to camp near the Conejos River in Colorado. She and Danny were often accompanied on camping excursions by Danny’s sister Mary and her husband Simon Hancock. The two couples also enjoyed traveling to visit Danny and Mary’s siblings in Idaho and Colorado.

A longtime member of the United Church, Nona volunteered at the church thrift shop. She and Danny were one of seven Golden Anniversary couples honored during  the Women’s Christian Service Society’s Jubilee Marriage Celebration held at the United Church on June 22, 1997.

Shortly before her passing Nona had the pleasure of holding the youngest of her six great grandchildren, babies Brixton Brandt and Noelle  Brandt.

Nona was preceded in death by her parents, Ida and John Kimbrel; her sisters, Maxine “Terri” Phillips and Inza Baker; her brother, Douglas Kimbrel; and her youngest son, Edward Carl Brandt.

A Celebration of Life to honor Nona will be held on Saturday, October 29 at 11 a.m. at the United Church, 2525 Canyon Road in Los Alamos.

In lieu of flowers, memorials in honor of Nona may be made to the Los Alamos Visiting Nurses, the United Church, or a charity of your choice.