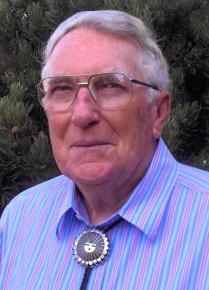 He spent his last weeks, days and hours in the loving embrace of his wife Susan, his children and grandchildren.

Newby was the third child born to John Robert “Uncle Bob” Ellington and Martra Leila Ellington. He was born Sept. 29, 1933 and raised in Saxapahaw, North Carolina.

He graduated from Eli Whitney High School in Alamance County,  and has a large and loving extended family.

Newby joined the U.S. Navy in 1953 and supported the nuclear weapons development program while stationed at Los Alamos and in the South Pacific.

He met Flossie Martinez Ellington at Fuller Lodge and they married in 1957. They moved to Espanola, built a home with their own hands and raised their family.

Newby continued to work in Los Alamos building a successful career for the next 40 years, eventually rising to the office of Deputy Division Leader at Los Alamos National Laboratory. He earned the admiration and respect of his many coworkers.

He loved the home and oasis he and Flossie built and nurtured in Espanola and anyone who saw it could tell. Many people think of irrigating as a chore – he viewed it as a great pleasure; Newby deeply loved tending the soil, planting flowers and watching the trees bloom and bear fruit. Flossie passed away on March 1, 1989.

Newby was fortunate to enjoy a new life with Susan, and together they built a new home overlooking the canyons that surround Los Alamos. Over their 21 year marriage, they enjoyed many wonderful and scenic trips throughout the United States.

Newby was an avid fan of the St. Louis Cardinals and UNM Lobo basketball. He also loved hiking with his friends and daughter, Yvonne.

Newby selflessly donated copious amounts of his time to The Habitat for Humanity and to LANL after his retirement.  He was an Area Director for the Retired Public Employees Association of California and a proud Director for the Acequias de Herrera.

He was preceded in death by his parents, his sister Mattie Lou, brother-in-law Joe Guthrie, and his brother John Harold Ellington.

The family wishes to thank Drs. Lindberg, Goddard, and Matthews, the excellent nurses from Visiting Nurses and Critical Nursing Staffing, and Loretta Valerio from the Department of Labor for their deep concern and caring.

Newby said, “I’ve had a good life, blessed with a wonderful family and good friends. Grieve for me, as I know you will, but don’t let it consume you. Get on with your lives and remember the good times we’ve had together.”