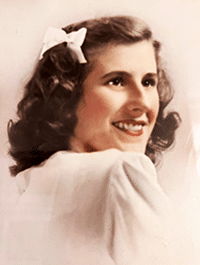 Mimi was the fifth of six children born to Orville and Mary Lauver. When she was eleven years old, her father died and Mary raised the six children on her own. Mary believed strongly that girls should go to school and have professional careers.

Mimi took her mother’s beliefs seriously to heart. She earned a B.S.N. from Wittenberg University, then went on to earn her nursing degree.

In 1950, she married Paul Parker Anspach, the son of a Lutheran pastor who was a good friend of her father’s. Parker had just graduated from Divinity School at the same time Mimi graduated from nursing school.

Married and armed with good educations, Mimi and Parker headed to Japan where they would live for fifteen years, working as missionaries for the Lutheran Church of America. While in Japan they had four children; Deborah, Jennifer, Joel, and Jonathan.

The family returned to the U.S. in 1967 when Parker received a call to serve Bethlehem Lutheran Church in Los Alamos. Mimi dusted off her nursing skills, renewed her credentials, learned to drive, and finally began her nursing career in Española.

Mimi and Parker divorced in 1982, and Mimi moved to Albuquerque where she continued her career at Kaseman Presbyterian Hospital. She retired in 1998 and has spent the intervening years planting and harvesting the best and the biggest vegetable garden ever.

Thanks, Mom, for being the exceptional, independent woman you were. You saw so much change in the almost 100 years of your life and you have passed on to all of us your indomitable spirit.

There will be a reception following the service.