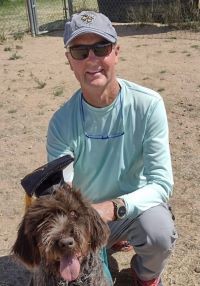 As a child, Mike lived in many parts of the United States and even Germany while his father was an officer in the US Army. Mike loved sports – he was an avid golfer, bowler, and baseball player. And he loved the outdoors – hunting and fishing, in particular. Everything Mike did, he did with determination and perseverance. As a teenager in high school, his professional aspiration was to work for Los Alamos National Laboratory. And of course, that is what he went on to do!

Mike earned his B.S. in Engineering Science and Mechanics from Georgia Institute of Technology in 1978. He then earned his M.S. in Mechanical Engineering from the University of Houston in 1980 Mike met his wife, Karen, at a street dance on her college campus in 1975. They dated throughout college and married in 1979. They moved to Los Alamos, NM, in October 1980, where Mike began his 40-year career with Los Alamos National Laboratory (LANL).

His technical journey was quite diverse, and Mike loved his time at Los Alamos. His first project was building a solar pond and conducting a thermal analysis of its performance. This was a great project for a young professional whose graduate interests were in the field of solar energy.

During his career at LANL, Mike provided computational analysis in the areas of heat transfer, nuclear safety, hypervelocity impacts, armor/anti-armor, theater missile defense, mechanical response of high explosives, high-rate deformation response of materials, and ballistic testing and evaluation of ceramic armors. During the second half of Mike’s career, he served as a line manager in the Theoretical (X) Division where he specialized in high-explosive-metal applications and led the Laboratory’s group of professionals supporting safety and surety of nuclear weapons from cradle to grave. Mike was a strong advocate for the Laboratory and for the employees who worked with him. He mentored many staff to subsequent leadership positions. And he was a great colleague, mentor, and friend in equal measures.

Mike’s interests beyond work were wide and he filled his short 66 years with activities that continued to challenge and interest him. His latest passion was astrophotography and night sky photography. His friends and family have many awe-inspiring photos of lightning storms, nebula, comets, the Milky Way and more.

Mike and Karen’s two children, Scott and Whitney, were born and raised in Los Alamos. Mike was always present at their school and sporting events where he was either cheering or “advising”. He was incredibly proud of their personal and professional accomplishments and enjoyed traveling with each of them as adults for golf tournaments, fishing and hunting adventures, and epic bike rides on the beaches of Hilton Head Island.

Mike is survived by his wife, Karen, his children Scott (Kari) and Whitney (Gene), grandchildren Adalyn and Mason, and mother Martha.

We miss him terribly but are inspired by his passion for pursuing, with great determination, all things that interested him.

We have chosen to celebrate Mike’s life by sending a portion of his ashes on a space mission where they will be released into the atmosphere to orbit Earth for up to 25 years before re-entering the atmosphere and becoming a shooting star. Mike’s space flight is planned for launch from Cape Canaveral in late Summer 2023.

“I would rather be ashes than dust!
I would rather that my spark should burn out in a brilliant blaze than it should be stifled by dry rot.
I would rather be a superb meteor, every atom of me in magnificent glow, than a sleepy and permanent planet.
The function of man is to live, not to exist.
I shall not waste my days trying to prolong them.
I shall use my time.”