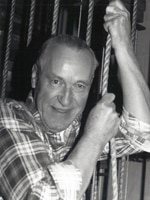 He was born on November 26, 1929, to Gertrude Forrest Replogle Shepard and Elmer Shepard in Sidney, Ohio. He was preceded in death by his parents, older brother Norman Lee Shepard, and sister-in-law Alice Shepard. Marlan is survived by his wife Jody, two sons David and John, granddaughter Delila E. Cuevas, grandson-in-law Cesar Cuevas, and his nephew Christopher Lee Shepard and his family.

Marlan was graduated from Miami University at Oxford, Ohio, and Oregon State University in Corvallis—mathematics and chemistry. After working at the University of Colorado, Marlan served in the United States Army from July 1953 to June 1955 as a Physics Science Assistant. He earned a National Defense Service medal.

Marlan first joined W-Division and later X-Division in the Los Alamos Scientific Laboratory in 1957. He designed units for national security. Marlan was associated with other scientists for several events at the Nevada Test Site. Included in these events was “Operation Hartack Phase II—1958,” “High Yield,” “Misty Rain,” “Mighty Oak,” and others in the 1970s and 1980s.

Marlan had a real love for opera; G. Verdi was a favorite composer. He worked backstage with Los Alamos Light Opera and Los Alamos Little Theatre for over 50 years. He was often the stage manager and electrician when needed. He met Jody Kennedy (Helen Joan) at a light opera production. They were married June 15, 1963. Marlan’s sons were the delight of his life: David Edward Shepard of Albuquerque, NM and John Martin Shepard of Rio Rancho, NM.

During his life in Los Alamos, Marlan was appointed to the Fuller Lodge Renovation Committee and the Los Alamos County Recreation Board. He helped coach flag youth football and attended years of soccer games watching both sons play. Marlan was a Los Alamos Municipal Judge, sitting from 1976 to 1985.  He had a deep affection for Los Alamos and an even stronger respect for the National Laboratory.

Marlan’s funeral service will take place Saturday, May 26, 2018, at The Church of Jesus Christ of Latter-day Saints at 366 Grand Canyon in White Rock, NM, at 11:00 a.m. Viewing will be from 10:15 to 10:45 a.m. Interment will immediately follow the service at Guaje Pines Cemetery in Los Alamos. There will be a light luncheon served at the church immediately following the service for all attendees. Family and friends will join the luncheon-in-progress following the interment.

The family wishes to thank the Los Alamos Medical Center for Marlan’s excellent care from the second-floor staff and Dr. Martin. Also, special thanks to Sue Hansen and the staff of Ambercare Hospice as well as the staff at Sombrillo Nursing Facility. The family of Marlan Lyle Shepard has entrusted the care of their loved one to the DeVargas Funeral Home & Crematory of the Espanola Valley. 505.747.7477 www.devargasfuneral.com.