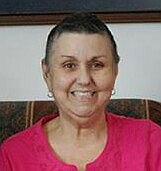 Marilyn Quadracci Fabry, 60, a resident of Los Alamos, went home to be with our Lord on Saturday, August 31, 2013 following a battle with cancer. She was born on June 13, 1953 to Art and Laura Quadracci in McAlester, Okla. She was an only child – God bless them.

She grew up in McAlester, OK and attended Oklahoma State University (Go Pokes!) where she received a Bachelor of Science degree in Mathematics. She taught in Oklahoma, Texas and New Mexico; the longest in New Mexico at Los Alamos High School for close to 20 years.

She was preceded in death by her parents; husband, David Fabry; father-in-law, Frank Fabry and numerous grandparents. Mrs. Fabry is survived by her children, Stephanie Pittman and Andrew Fabry; grandchildren, Christopher and Alexandra (she wanted more but her son told her not to be greedy) and ex-son-in-law that she still claims, Jim Pittman; daughter-in-law, Sarah McQuate; step-mother, Debbie Quadracci; mother-in-law, Frances Fabry; cousins that were more like siblings, Eula Campbell and Ralph Lancaster and many other cousins and countless friends.

She enjoyed drawing, cross stitching, baking, decorating cakes, watching movies and teaching. At different times in her life, she played the piano at church. Playing piano was lifelong comfort and her therapy. Teaching was God’s call for her. Her students are her babies and she loves each of them forever.

A memorial service will be held on Saturday, September 7, 2013 at 10 a.m. at the White Rock Baptist Church.

In lieu of flowers, Marilyn would like donations to be made to the White Rock Baptist Church Youth Group or your church Youth Group. Marilyn requested that people attending the service wear orange if they have it. The family of Marilyn Quadracci Fabry has entrusted their loved one to DeVargas Funeral Home & Crematory of the Española Valley. 505-662-2400 – www.devargasfuneral.com.