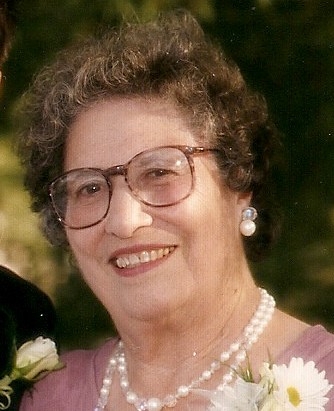 She met Louis Geoffrion in Las Vegas and they were wed September 16, 1949. They moved to Los Alamos after their marriage where they lived for the 58 years until Marie was preceded in death by Louis in 2007.

Marie was a long time resident of Los Alamos, NM and a recent resident of Sierra Vista Living Community in Santa Fe, NM.

While in Los Alamos, Marie was an Administrative Assistant for the Los Alamos National Laboratory (LANL) as well as a devoted wife, mother, and grandmother.

Marie is survived by her children Angelique Geoffrion of Aptos, Calif., and Greg Geoffrion of Los Alamos, NM and her four grandchildren, Max and Moorea Lippert, as well as Tyler and Riley Geoffrion; her sister, Irene (Gotti) Morris, of Albuquerque, NM and brother-in-law Ray Angel of Las Vegas, NM. She was preceded in death by her sister Dorothy Angel in 2011.

Rosary will be held at 7 p.m., Thursday, March 7 at Immaculate Heart of Mary Church in Los Alamos.

The Mass will be celebrated at 10 a.m. at Immaculate Heart of Mary Church in Los Alamos Friday, March 8 with Father John Carney as celebrant.