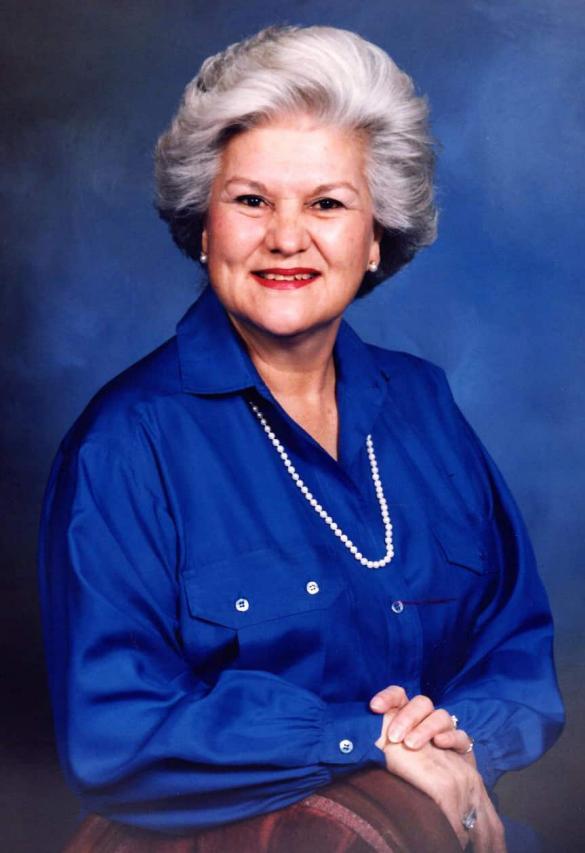 Our beloved matriarch Margaret Antia Chavez, wife, mother, grandmother, great-grandmother and friend, passed away at her home on Tuesday morning, August 28, 2018 at the age of 89. She was fortunate to spend her final days surrounded by those who loved her.

Margaret was born in Las Vegas, N.M. on March 12, 1929 to Alfonso and Ellen Geoffrion. As a young girl she suffered the tragic loss of her little brother Sonny, an event that remained a painful memory for her and her brother Billy for the remainder of their lives. She graduated from Las Vegas High School in 1946. Shortly thereafter she met the love of her life and best friend Pascual Chavez, a dashing and seemingly arrogant sailor just home from World War II. As she later relayed to their kids, she showed little interest in him for months, but he persisted and eventually won her over and they fell into a love that lasted a lifetime.

They began their life-long journey as husband and wife on July 12, 1947 at Our Lady of Sorrows Catholic Church in Las Vegas, N.M. Shortly thereafter Pascual was hired by the National Labs in Los Alamos and they moved to “the Hill” to make their home for the next 71 years. As one of Los Alamos Medical Center’s first 100 patients, in 1948 she gave birth to their beautiful daughter, Mary Ellen, who was premature. Mary passed away soon thereafter marking the second heartbreaking event Margaret overcame in her young life.

Margaret, or Margo to her friends and Maggie to Pascual and to her son James, raised their eight children at their overflowing small home in Los Alamos. She was a dedicated and devoted mother. She was a tireless source of support and encouragement to her children, whether attending local or out-of-town events for track, swimming, volleyball, wrestling, baseball, basketball or football. Sometimes the quietest and other times one of the loudest, she always had the sweetest voice at any event, win or lose.

She adored all of her grandchildren and great grandchildren and her excitement for welcoming each new one into her arms as if they were the first never waned. She treated each of her children’s friends as if they were her own and would always have an open seat for the strays for holiday dinners, despite space always being tight. Cooking and preparation for Christmas or Thanksgiving dinner was usually started the day before, and with the help of her daughters Margaret provided legendary meals remembered by all those fortunate enough to share with the Chavez family. Countless friends of the family will always remember her posole, mashed potatoes, Spanish rice, turkey, pies and especially her astounding red chile.

Margaret and her husband proudly presided over each of their children’s First Holy Communion sacraments at the Immaculate Heart of Mary Catholic Church in Los Alamos. Following services, celebratory dinners most commonly took place at El Paragua restaurant in Española, owned and managed by Stephen’s godparents, the late Francis and Luis Atencio.   Margaret was a devout member of the church throughout her life, and spent the early years meticulously dressing her eldest daughter Annette for Mass in her Sunday best with white gloves and curls, and sons Nick and Mitch in pressed suits and polished shoes. When Annette became older, she was employed to help dress and groom the five younger siblings.  Margaret cherished time with friends, visiting over coffee and donuts at the parish hall following nine o’clock Mass for more than 60 years.

Aside from the tremendous responsibilities at home raising her many children, Margaret volunteered for several years teaching sixth grade religious education C.C.D. classes for the youth of I.H.M., including children Francesca and James. A friend of Stephen’s once relayed that she always had a sweet smile and never the nasty glare he probably deserved for his obnoxious behavior. Margaret was also always willing to volunteer for her children’s numerous school activities. Further, she spent endless nights by the hospital beds of her children Nick, Annette, and James during their extended hospital stays and recoveries due to various cancers and injuries.

When James was in a near fatal car accident and in the hospital in Albuquerque, Margaret made the sacrifice of moving in for several months with her longtime friend Andrea Kellovich so that she could be close to James to cook for him and be by his side during his long and grueling rehabilitation. She offered the same support for her daughter Annette through her first battle with cancer and subsequent relapses. Despite her enduring care of Nick in his battle with Lymphoma, she ultimately lost her second son when he succumbed to his cancer in 2002.

Margaret was a tireless homemaker who inarguably worked as hard as her husband Pascual, who himself worked two jobs for most of his life. Margaret would often patiently field calls from neighbors, some perhaps overly dramatic, indicating the various forms of adolescent mischief her children were creating around town. But when it was time to discipline, Mark and James have vivid memories of a piece of orange Hot Wheels track utilized as an attention-getting tool. Stephen remembers a broom being assertively but ‘lovingly’ wielded to back him into the corner of the kitchen when he dared to show disrespect.

Despite what seemed at the time to be harsh discipline, her children were never harmed, and they admit that they deserved whatever consequence was dished out. They adored her and remember these incidences with unwavering and unyielding loyalty and devotion. Later in life, as she helped to raise adopted granddaughter Vanessa, many parents often asked for advice and wisdom from the woman who had already successfully raised eight children. Her children remember climbing into her bed when feeling sick as toddlers (and adolescents) in the middle of the night, and years later, lying alongside her in her hospice bed during the final weeks of her life. Their tears greatly outnumbered her own, as she offered words of comfort and peace, graceful until the end.

Margaret overcame breast cancer and endured countless surgeries during her life. She suffered a debilitating stroke in April 2017, but diligently worked herself back to health after several months in a rehabilitation facility. She spent her remaining time on this earth living peacefully and gracefully at home. She was surrounded by her husband, children and grandchildren, who cared for her as lovingly as Margaret herself had done for her own mother until her death in 1985.

Daughters Annette and Francesca took on the lion’s share of coordinating and providing her care for most of her final three years while adopted daughter/granddaughter Vanessa became an equal partner in her care after moving back to New Mexico in 2017. Sons James and Stephen also spent significant time and precious moments caring for Margaret. Others lending a hand included daughter Stephanie and granddaughters Nicole and Michaela, as well as grandson-in-law Trevor. Son Stephen’s significant other Sue Cote, while a fairly recent addition to the team, immediately began lending support in many ways.

As Margaret’s hairdresser, Stephanie kept her beautiful, including the day when Margaret and Pascual renewed their wedding vows at their home following 70 years of marriage. Stephanie was honored to work with Carla Jaramillo in preparing Margaret’s hair and makeup for her final viewing. Margaret was also blessed immensely with a devoted caregiver and dear friend Kathey Romero, whom she affectionately called ‘Lou’, as well as Kathey’s granddaughter Vida Romero.

Margaret’s radiant beauty and strength were present until the very end, as she offered peace, comfort, and gratitude to her husband and family through her final days. She had devout faith in God, often commenting to those less stoic than herself that there was nothing to be sad about. She would say that her passing was simply part of life and that she was to be reunited with family that had already passed, especially her sons Nick, Mitch, and Mark.

She served as an endless source of comfort to those around her. Her family will find solace in knowing there will be countless situations in the future where they will be blessed by wonderful, loving memories of something she said or did. She was a true matriarch, holding her family together through countless tragedies as a solid pillar of strength. She will be fondly missed by all that knew her.

A celebration of Margaret’s life includes a public viewing at 5:30 pm followed by a Rosary at 6:00 pm on Wednesday, September 5 at the Immaculate Heart of Mary Catholic Church in Los Alamos, NM. The Funeral Mass will be held at the Church at 11:00 am on Thursday, September 6 with a luncheon reception immediately following in the Parish Hall. A Funeral Procession will leave from the Church at 1:30 pm for the Santa Fe National Cemetery, where an interment ceremony of Margaret’s ashes is scheduled for 3:00 pm.