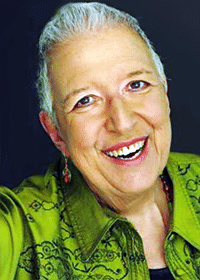 Madeline passed away on December 28, 2022 after a long & fierce battle with cancer. She died at home with Birgitte and their dogs, in peace & beauty.

Madeline & Birgitte fell in love with Abiquiu and bought their property on the Chama in 2000. They built a house made for their extended pet family, the enjoyment of birds & the beauty of the river, and for music performance.

In 2008 the first season of the Abiquiu Chamber Music Festival opened and music continued to be played for twelve summers until Madeline’s last diagnosis in 2019. In that period 7,000 people walked through the doors of ACMF and enjoyed world class classical & contemporary music performances by both local, national and international performers – and joyously accompanied by the birds of Abiquiu. Most patrons hailed from the local community, but many came from afar, having heard of this extraordinary festival located right on the Rio Chama. The impact of Madeline’s passion in creating ACMF has had a lasting effect on the Abiquiu community. Thank you to everyone who came!

Madeline also was a successful & much beloved piano teacher. She was a music professor at Arizona State University before coming to New Mexico and opening the Los Alamos Piano Studio. Her excellence as a teacher, her impact on young people, and her mentorship of generations of high school & university students made a mark on many budding and subsequently successful musicians. In the words of one student: “Madeline was bigger than life, stronger than the Himalayan mountains, and warm like the everlasting sun.”

Madeline will be missed by many and her memory is lovingly cherished by Birgitte, Lannas & Rita – at home where she belonged.

A memorial-recital will be held by and for friends, colleagues, and students at Crossroads Bible Church, 97 East Road, Los Alamos NM 87544 on Saturday, February, 4, 2023 at 11 a.m. All are welcome to attend.