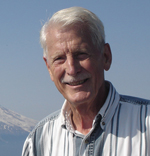 Larry Wangen, age 73, a resident of Edmonds, WA since 1997, passed away Monday July 27, 2015 at the Virginia Mason Hospital in Seattle, Washington, surrounded by his beloved family. Larry and his family fought hard for two months following a tragic surgical accident.

He was born October 3, 1941 in New Rockford, North Dakota to Obert and Violet (Pfeiffer) Wangen. Larry grew up in North Dakota and at age 13, he and his family moved to Lynnwood, WA where he graduated from Edmonds High School in 1959. After graduation, he served in the U.S. Army as a surveyor stationed for much of that time at Camp St. Barbara, S. Korea near the border to N. Korea.

Upon his discharge, he attended and graduated from Western Washington University in Bellingham and eventually earned his PHD in Chemistry from the University of Washington in Seattle. Larry began his career as a research scientist working for Argonne National Laboratory located just outside of Chicago. In 1975 he was offered a job at Los Alamos National Laboratory in New Mexico where he worked for many years and raised his children. In 1993-1995 he worked for The International Atomic Energy Agency in Vienna, Austria, and concluded his career consulting for the Department of Energy working and traveling with Russian scientists on nuclear and chemical materials safety and security.

While residing in Los Alamos, he was a longtime member of The United Church and was involved with Stephen Ministries. Since residing in Edmonds he has volunteered with the Shibba program at the Edmonds Senior Center. He enjoyed hiking, keeping physically fit, reading, traveling, but most of all he enjoyed his family; they were his whole life.

Larry was married to Judith M. VanderWoude on September 10, 1965 in Everett, WA and they would have celebrated their 50th anniversary this September.

He is survived by his wife Judy Wangen of Edmonds, WA. A son Rick Wangen and his wife Shelley and their daughter, McKenna of Newcastle, WA. A daughter, Rachel Wangen-Hoch and her husband Eric Wangen-Hoch and their sons, Elijah and Jonah of Sedro-Woolley, WA. Three brothers, Richard Wangen of Seattle, WA, George Wangen of Edmonds, WA, and David Wangen of Chehalis, WA, and a sister, Marylynn Wangen of Centralia, WA, as well as numerous nieces and nephews. Larry was preceded in death by his parents and his brother, Douglas.