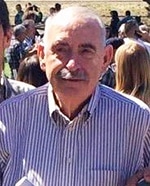 Larry was born in a cabin outside of Cloudcroft, New Mexico to Eula Mae and Odell Hatler. He was raised in Central New Mexico, outside of Silver City, where his dad was a bull dozer operator at the Kennecott copper mine.

Larry attended Cobre High School and continued his education at the University of New Mexico, ((UNM) where he was awarded both BS and MS degrees in Chemical engineering. During his high school and early college years, he enjoyed running the hurdles and pole vaulting in track and field.

While at UNM he met and married Brenda Rex. They moved to Beaumont, Texas, where he took his first job with Gulf Oil. Their oldest son, Vance was born in Beaumont shortly after their arrival. Their decision to move to Los Alamos was made easier after a storm dropped 8 inches of rain in less than a day.

Larry enjoyed coaching his sons through little league baseball and YAFL football, as well as spending many hours in the stands while supporting their middle and high school football games and track meets.

During his career at the Laboratory he became one of the country’s leading experts in the field of high explosives. One of his last conversations with an old friend was of his participation in the Arkansas Titan II missile explosion event, which was also detailed in the book, Command and Control. After his retirement from the Lab, he enjoyed walking his dogs and spending time with his grandchildren and keeping up with all their endeavors. His dry humor, stubbornness and 70’s vintage mustache will be sorely missed.

Larry was preceded in death by his mother, Eula Mae; father, Odell; wife, Brenda; and son, Vance. He is survived by his son, Loren (Jolene) and daughter-in-law, Karri; and his five grandchildren: Samantha Torres, Kenidee, Caleb, Kyle, and Caris Hatler.

A graveside service will be held on Saturday, July 21, 2018 at 10:00 am at the Guaje Pines Cemetery in Los Alamos with a reception to follow at the Crossroads Bible Church. In lieu of flowers, donations can be made to your favorite animal charity.

The Family of Larry E. Hatler has entrusted the care of their loved one to the DeVargas Funeral Home of the Espanola Valley. 505.747.7477 – www.devargasfuneral.com.