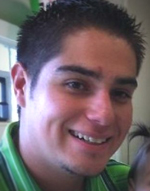 Kevin Steven Donavan Chavez, 27, a resident of El Rancho, passed away on Tuesday, September 15, 2015 after a long and courageous fight after a car accident in April 2012 that left him a quadriplegic and changed his life forever.

Kevin rehabbed intensely at Craig Hospital in Englewood, Colorado for four months. Kevin had many bumps along the road, but continued his fight wanting to do great things. Kevin was born on May 4, 1988 to Felix and Gloria Chavez.

He was preceded in death by grandfathers, E. Nestor Lujan and Max L. Chavez Jr.; aunts, Becky Chavez (God-mother) and Luci Chavez. He attended Piñon Elementary, Los Alamos Middle School and was a 2006 Los Alamos High School graduate. Kevin played varsity soccer, and was also a state champion in track. He attended University of New Mexico’s EMT program. He recently was enrolled in online classes through Arizona State University obtaining a Bachelor’s Degree in Psychology which he would have obtained in December 2015.

Kevin is survived by his parents, Felix and Gloria Chavez; sisters, Kristin and Kamille Chavez; niece/God-daughter, Aaliyah Chavez (who was his pride and joy); his dogs, Marley and Chase who he was currently training to be his service dog; grandmothers, Celia G. Lujan of Nambe, and Ruth G. Chavez of Los Alamos; aunt, Marci O’Donley and husband Rudy of McAlester, OK; uncles, Abel Chavez of Pueblo, CO, Gary Chavez of Los Alamos, Danny Lujan and companion Pam Pacheco of El Rancho, and Robert Lujan of Nambe; Jerry Koehler (God-father) of Denver, CO; his caregiver, Gloria Silva who had been his boss as Kevin referred to her; cousins, Shane O’Donley,  DJ. Lujan, Armando (Julie) Chavez, Briana (Nolan) Rees; special cousins, Destiny and Logan O’Donley. Kevin had many loving great-aunts, and great-uncles and many loving cousins from both his moms and dads side as well as many friends.

Kevin enjoyed discovering new technology, especially technology that would fit his needs. Kevin had a green thumb for gardening being directed by “The Boss.” He was such an intelligent man with such big dreams and a very big heart.

The family of Kevin Steven Donavan Chavez has entrusted their loved one to DeVargas Funeral Home & Crematory of the Española Valley. 505.747.7477 – www.devargasfuneral.com.