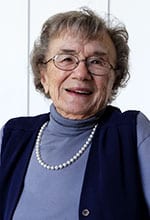 Julia Gauthier, a long-time resident of Los Alamos, employed in many occupations, a volunteer, and our Mother, Grandmother, and Great Grandmother, died in her sleep on 1 July 2018 after a brief battle with cancer.

Julia was born Julia Kushner in Passaic, New Jersey on 2 March 1925 to Susan and John (Jan) Kushner (Kusnir), then recent immigrants from what is now Slovakia. Julia (Julie) grew up–“a happy childhood”–in Passaic during the Great Depression and went through the Passaic public school system. Julie and her older sister Mary and younger sister Ann were raised much of the time by John, who suffered respiratory problems from his confinement in a Russian prisoner-of-war camp during World War I. Her mother, Susan, worked at an RCA factory in Newark, at that time an hour-plus commute by bus, and was the primary breadwinner. After graduating from high school, Julie trained and worked as a secretary for an insurance firm in New York City.

Julie met and married Bernard Gauthier after World War II ended. Bernard (Bernie) was in the Merchant Marines at the time, and soon went to work for the New York Central Railway, then for an insurance company. Julie and Bernie lived in East Paterson, New Jersey and had two sons, John (Jack) and Rory; they then moved to Los Alamos, New Mexico where they had a daughter, Carol. The family moved to Los Alamos, then located close to the middle of nowhere, because sister Ann had moved there and reported that there were “plenty of jobs.” During the trip across country, somewhere near the desolate New Mexico-Texas border, Bernie had stopped at a lone gas station and said to Julie, “We’re here!”  At the time Julie was horrified, but later she remembered it fondly.

Los Alamos in the early 1950s was still mostly fences, guards, and barracks. Julie and Bernie lived in a trailer park, where Julie somewhat watched a roving gaggle of neighborhood children while Bernie drove a truck for a construction company. They bought a small plot of land in the mountains above Taos, where they built a cabin and spent much of their free time. Later Bernie worked for Los Alamos Scientific Laboratory (LASL). The family moved to a “Quad,” then to Albuquerque for two years, then several homes back in Los Alamos, and eventually to nearby White Rock.

After Bernie died in 1966, Julie took care of her three adolescent children on her own. She worked in the cafeteria at Pueblo Junior High School, then as a secretary for the LASL publications group. After 12 years with LASL, Julie retired in 1980 and then took a job with the Los Alamos Police Department (LAPD). Julie first worked as a dispatcher for LAPD, but she worried too much about her police officers when sending them on calls. So Julie moved into an office job where she also performed matron duties when women happened to be arrested. After 15 years with LAPD, Julie retired again; however, she remembered working for LAPD as “the best job I ever had.” In retirement, Julie remained engaged, working over the years as a volunteer at the White Rock Senior Center, the Los Alamos Chamber of Commerce, and the Los Alamos Medical Center.

Julie was always an independent spirit. She lived on her own and took care of herself (but under the watch of her children Carol and Rory and their spouses) until the last two weeks of her life. In May all the family gathered with Julie at her home in White Rock to celebrate her 93rd birthday.