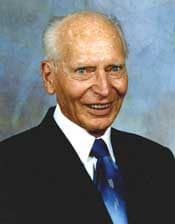 Joseph Lawrence Menzel passed away at the age of 98, on Friday, January 7, 2022, in his Los Alamos home surrounded by his family.

Joe was born on December 15, 1923, in Dubuque Iowa to Louise Mary Clemens and Joseph F. Menzel, Jr. He enlisted in the Navy in 1944 and fought in World War II serving as a Quartermaster aboard the USS Weeden in the Asiatic-Pacific and the Philippine Liberation. He was honorably discharged in 1946.

He was recruited into the newly formed Protective Force in 1947, as security at the Los Alamos National Laboratory, transferred from the United States Army to Civil Service Personnel. He worked in the Protective Force in various capacities until his retirement in 1987.

In 1952 he met the love of his life, Mary (Tsingou) Menzel and they were married on April 27, 1958. Mary and Joe enjoyed 63 years of love and happiness. Throughout retirement the two of them were always together whether hiking, riding a tandem bicycle, swimming laps, or walking their dog.

Joseph was preceded in death by his siblings, Geraldine Ellen Vogt (Menzel), Merle Frank Menzel both of Iowa and his sister Anna Mae Louise Menzel of Colorado Springs.

A private Memorial Service will be held on Thursday, January 13, 2002, at Rivera Funeral Home in Espanola, NM followed by a private military burial at the Santa Fe National Cemetery. In lieu of flowers the family requests donations be made to the Salvation Army.