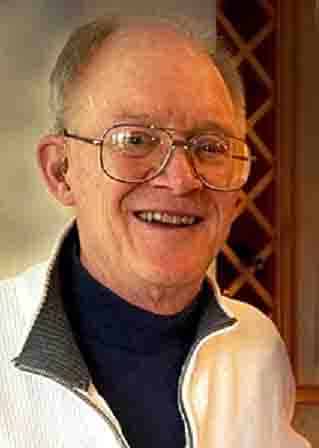 Jack was born July 10, 1938 in Akron, Ohio to Arthur Warrington and Wilhelmina Bell Gosling, and spent the early years of his life there with sister Elizabeth Ann, brother Arthur, and a slew of young school and neighborhood friends. A 1956 graduate of Buchtel High School in Akron, Jack lettered in basketball, track, and cross country.

Over the course of his career Jack was associated with a number of space missions, mostly sponsored by NASA. He published more than 450 scientific papers in a field that has come to be called heliophysics, with an emphasis on the physics of the solar wind and its interaction with Earth’s magnetosphere. His research has been, and still is, highly cited, not the least of which has been his least favorite paper “The Solar Flare Myth” with subsequent pro and con outcries from colleagues.

He was in frequent demand for reviewing professional papers for various scientific journals, well-known as “Gosling-izing” such, in great detail–it has been noted that his reviews could be longer than the actual paper. Among a number of other awards, Jack won the American Geophysical Union’s John Adam Fleming Medal and the National Academy of Sciences’ Arctowski Medal.

Family and friends were a very special part of Jack’s life. He married Marie Ann Turner in Berkley in 1963, then moved to Los Alamos where they raised two sons, Steve (now with wife Deborah, grandkids Reese and Molly in Denver, CO) and Mark (now with wife Kate and grandkids Sasha and Alyona in Monument, CO). He spent many a dedicated hour coaching the boy’s basketball and baseball teams.

Marie died in 1990 of complications associated with a brain tumor. He subsequently married Margaret Judith “Judy” Stanley Hughes in 1994, gaining two stepsons, Greg (Portland, OR) and David (Loveland, CO) plus David’s clan: Shannon, Dara, Samantha, and Amanda (Ft. Collins, CO). He celebrated his 40th birthday with a Marie-planned backyard belly dancer party (and two car police raid), and then a 60th with a Judy-planned 100 “close” friends backyard party with a string quartet—both genuinely a surprise!

He remained good friends with many of his professional colleagues and celebrated his 75th birthday with a professional symposium arranged by colleagues in honor of his highly respected career and, of course, his aging personage. He also remained in contact with a core group of grade and high school friends through frequent reunions, special gatherings, and Buchtel Boys golfing events to swap lies and rekindle old and treasured memories.

Jack participated in numerous adult sport activities, including basketball, tennis, and golf, hiking, back-packing, and cross country skiing. He enjoyed reading from his extensive library, playing the piano and bridge, and was an avid bird watcher. He (and Marie, then Judy) traveled extensively around the world as he delivered invited talks, shared scientific wisdom with colleagues, and explored the venues. Jack and Judy moved to the Boulder area after each had retired. These were old stomping grounds for Jack, and 3 of their four sons had settled there, so it seemed a good choice. He and Judy enjoyed many explorations of the great Southwest canyons, mesas and National Parks, chasing down waterfalls and new birds for the life list. Jack continued to enjoy “doing science” at LASP until his lung cancer diagnosis in 2016.

All who enjoyed Jack as a part of their life found him to be bright, interested and interesting, thoughtful, respectful, honest (to a fault?!), patient, steady, kind, and even funny, with a memory like a steel trap. He will be sorely missed by all who have loved him and had the good fortune to share in his full and rich life, both professional and personal.

Jack was preceded in death by his parents and first wife Marie. His current wife Judy and many extended family members on both the Gosling and Stanley branches of the clan remain to hold him in memory.

Jack insisted on no formal “hoop-lah” upon his death. In lieu of such things, he suggested any donations be sent to the University of Colorado John T. Gosling Endowed Fellowship, a fund used to support undergraduate and graduate student research pursuits in the field of space physics, or to Sister Carmen Community Center, Lafayette, CO in support of families working hard on “making it” in our current world. Or he might advise that you just “take a hike” and think of him as you enjoy your local great outdoors.

Friends may share condolences with the family online at www.darrellhowemortuary.com.