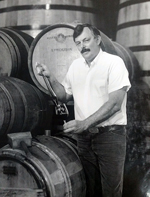 JAMES W. ALLEN Aug. 13, 1934 – March 5, 2017
Jim Allen died peacefully on March 5, at his home in Santa Fe, surrounded by his brothers and family. He is survived by his daughter Alicia, daughter-in- law Marcia, son Daniel, granddaughter Tyler, and his brothers Michael, Peter and Steve.
Born in New York City, Jim grew up in Wayne, Pennsylvania, graduating from Radnor High School. He then worked in Alaska in the fishing industry, and went on to travel the world, working as an interpreter for the United Nations in Vienna, and teaching English in Greece and Germany. He met his first wife Barbara in Greece, and many years later, his second wife Renata in Poland.
In the early 1970s, he worked as Director of the Head Start and Interstate Tutor Project for the Colorado Migrant Council in Boulder, and also attained a degree in Political Science from Denver University. He then moved his family to Santa Fe, New Mexico, where he taught Sociology at the College of Santa Fe, and designed and built
several adobe homes.
While in Santa Fe, he became interested in winemaking, and was one of the founders of the New Mexico Vine and Wine Society, and the New Mexico Winegrowers Association. He and his two brothers, Peter and Steve, also founded Second Street Brewery, now in it’s 20 th year. Jim was then invited to be a Project Director at the National Association of Farmworkers Organizations (NAFO) in Washington, DC, collaborating with Ted Kennedy and Cesar Chavez to create new laws improving the lives of migrant workers across the US.
In 1978, he moved to the Napa Valley to pursue his interest in winemaking, founding Sequoia Grove Winery with his brother Steve, who became the viticulturist. He was also a founding partner with Taittinger’s California Champagne project, Domaine Carneros, in Sonoma. He was a modern day pioneer of Napa Valley Rutherford Cabernet, working closely with his friend and mentor, the world-renowned wine master Andre Tchelistcheff.
Jim soon achieved international recognition as a distinguished Napa Valley winemaker, winning many awards, including the Gold Medal at the International Wine Competition in London for his 1982 Estate Cabernet Sauvignon, and the Platinum Medal and Best Cabernet in America for his 1985 Estate Cabernet. He retired in 2004, eventually moving back to his home in Santa Fe, New Mexico.
He wrote several books over his lifetime, and in the decade after he retired, he completed his memoir about the inspirations and challenges faced by the new wave of winemaking pioneers in the 70s and 80s in Napa Valley and Sonoma, California. The book will be published soon. Please see his website for more information: jamesallenwinemaker.com.
Memorial Celebrations will be held in the next few weeks, in both Santa Fe, NM and Napa Valley, CA. Please RSVP for details to: jallenwine@yahoo.com.
In lieu of flowers, please consider making a donation to one of Jim’s favorite charities: feedingamerica.org; doctorswithoutborders.org; americares.org.
Menu
Los Alamos
41°
Fair
6:55am4:51pm MST
Feels like: 41°F
Wind: 0mph WNW
Humidity: 35%
Pressure: 30.37"Hg
UV index: 0
MonTueWed
59/36°F
59/36°F
59/36°F
Weather forecast Los Alamos, New Mexico ▸